cutting back .. the series 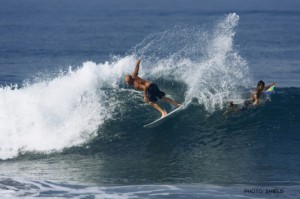 The left arm is in neutral, neither heading in nor heading out, the left arm doesn’t know what the head is thinking so it’s sticking close to the left leg and waiting for a directional message to issue from there. The right arm has been fire-rocketed out the back so far, and so fast the committee here need a marine architect to draw its relocation trajectory.

He’s done a Colombian neck-tie on the wave. Cut its throat. Kids have all the attitude. 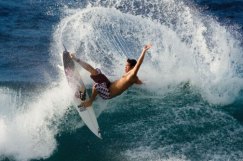 It doesn’t matter who is who on top of the board these days, they all want to rip off one of these dis-functional showboat spraytop finpopping back-sliding cutbacks.

Here Mick has his head pointing south, his hips looking west and his leading foot turned north – That’s about as pretty as Kate Moss on a catwalk. 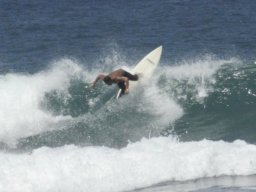 We must however comment upon the position of the arms, both of them. They are nicely weighted and attractively positioned but Brent, they are in the neutral position – they are neither forward or back, neither here or there.

Ms Gilmore’s face shows the strain of getting it back around and being a comp she probably hopes the beerpigs in the judging tent aren’t as sharp as they are paid to be. 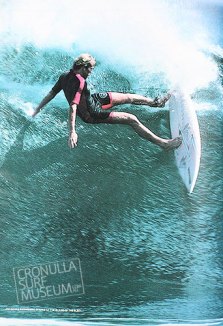 Jim is a bit of a throwback and this manoeuvre is half way between a Kanga, a Rasta, and a plane crash.

It’s all in the fingers 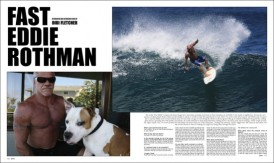 Nevermind all this sycophancy about Curren and Parkinson and the rest of those haole wimps, those white faced pretenders, those pathetic baby wave riders – Eddie has got the moves.

Potters’s craven acceptance of the temptation to whang off a slice of wave-top for the shot has completely destroyed his natural equilibrium and the result, although an attractive pic for the kiddie’s bedroom wall, is in reality a lesson of the power of vanity over ability.

Tom Servais took the pic and if he hasn’t made a million out of it by sticking his lawyers onto sites like this who pay nothing for using the image he should at least know that I for one appreciate the gesture.

In the early days Carroll didn’t realise the pivot benefits of coming around the backhand corner with all the knees bent and the backside lowered to a squat – but that didn’t mean he couldn’t assassinate moving water. The little bugger would never slow down, still doesn’t.

We can only imagine the sound that the manoeuvre must be making,

We, the committee, can commend the career pro boofhead for pulling off such a good move with a bare chest – doing it without a contest singlet – a step backward is a step forward if you know what we mean.

Workmanlike, that’s what this is, a tradesman’s change of direction.

His whole body structure in this frozen instant is not unlike that of a dancer, there is speed and a delicacy. 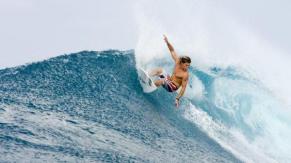 We look at the spray – 1st class. The hair swept back by his huge momentum, again 1st class. The physique – the man is toned no doubt. The hair colour – blonde – This shot has all the hallmarks of immortality

All his pics tell the story 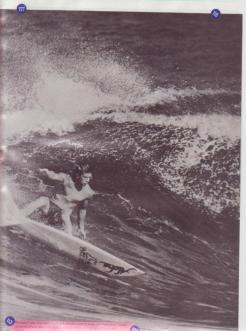 same with this bloke 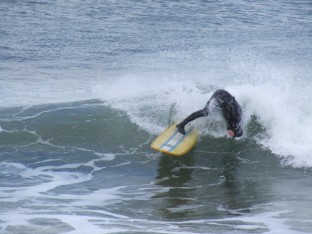