Jim is a bit of a throwback and this manoeuvre is half way between a Kanga, a Rasta, and a plane crash.

I cannot see any part of the board in touch with the water, his trailing foot has pushed so hard it has lost all contact – his leading foot is completely ineffective with half a heel over mid air, his whole upper body is compensating for the sharp change of direction yet the lad is bloody flying out there – on an ironing board.

We don’t see too much rocker there, we see  a fat little white cigar ridden to extremes. We see yet another Cronulla genius showing his shaper everything wrong with the board he has built. No wonder the best boardriders turn to shaping when their reflexes fade and the water geometry kicks in but even then it can be too late as the new generation tears diffferent pieces out of the waves.

Jim is here – with all his credentials. This fellow has done many miles. 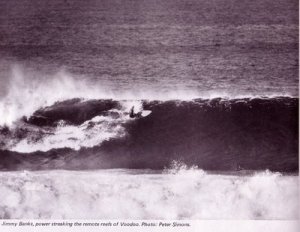