the problems in marketing the ‘ bra boys ‘ surf brand internationally, or anywhere.

Maroubra: Lieu de Tonneurre (French), Land of Thunder (Aboriginal) – A desolate piece of coastline plagued by onshore gales. First occupied in the mid 1880’s by the local wool scourers who had their works at the northern end of the beach. Probably forcibly.

Wool scouring involved taking delivery of woolskins from the local slaughterhouses and soaking them in freshwater for several days. They were then placed in a ‘ sweating house ‘ until they had decomposed enough to allow the wool to be peeled of easily. The wool was then scoured with hot water soap and soda and hung on racks to dry. The decomposed meat was flung into the nearest creek.

The labour was extremely hard given the nature and disposition of the product, particularly in summer when the  blow-flies, meat maggots and wild dogs became invasive. The local Aborigines were also prone to helping themselves to some of the cured hides, particularly those of them who had worked at the plant and had not been paid.

Common folklore has it that the seeds of what has become rampant beach localism began in this place and at that time. Works management had hired a local family to safeguard the hides, a family known to the police for their violent and uncompromising ways, particularly the three brothers.

Local records have divulged that these three men were responsible for clearing approximately 100 square Maroubra  miles of squatters, local tribes, encampments of escaped convicts, transient bush-rangers and more importantly, the local constable and his horse.

The brothers effectively created their own laws and enforced them with heavy handed violence – and not satisfied with securing the scouring works, the beach and the small township of Maroubra they managed to sail south across Botany Bay and secure a prominent headland called Cape Solander.

This was apparently a precautionary move based on the rumour that a foreign sailing fleet was heading to Botany Bay. Possibly English, or Russian, or French. Just foreign. Not local.

You people think that it’s going to be easy working out a men’s surf brand marketing routine when you’re giving us a name with BRA in it? Bra as in Brassiere? What are these boys selling with a name like that , some kind of man-boob elevation? This is America son, we don’t do fashion sex deviates! – all our wierdos get elected into politics and wear suits.

So these Bra guys have a surf tit product that they think we can get off the ground do they?

How the fuck is a man wearing a bra in the surf going to sell – a women yes, hell yes …. as a matter of fact we could do something there. Ask Rhonda if lace bikini tops have been done, and by who, and do we own them.

So this is the professional Australian surfing guy who wears a bra and catches waves and we will sell his product in America is it? THIS guy – who is he, Ed’s  ^ great great grandson? I gotta give it to ya, there is a resemblance there but his colour work is outta fucken control, those pink straps have got to go, plus the belly. What is this guy on – a 24 hour enema ? He should let it go soon I’m thinking – and I don’t want to be in the room when it hits the fan, plus he could use the suntan. (har har)

Anyway thanks for the hand-out. We’ll get back to you. Later. Much.

There’s gotta be a better way to deal with nipple rash boys.

‘ Tell me I have the concept right will you? We have Tommy Hilfiger, Ralph Lauren, R.M. Williams and Ermengildo Zegna, and you chaps want to put forward The Bra Boys as a serious brand proposition in the male fashion business, surf related of course – which is a pity, to be so so focused you know. What we find hard to fathom though is the relationship of surf, boys and bras. Striding around Bondi in summer wearing that lovely little pink number in the middle there might frighten the horses, you follow? Not to mention the local constabulary.

< – – – – – However, with the right approach it could be a very sweet look. I suppose that this young man, so sultry, so blonde – is a fair example of the boy bras is he? – and he’s Orstralian is he not? They are usually such brutal looking characters. So much chest hair. I must admit though that despite my initial misgivings this is quite a refreshing change from the usual stereotype we associate with the antipodes.

He’s a moody looking chap though isn’t he, then I suppose you’d have to be, given the meagre product range. Not a lot of flair in that lot, to be fair. I’ve always liked gingham myself. Note to Stephanie on that will you Charles .. the clasp arrangements as well, butterfly but sturdy.

On the practical side though, we must ask ourselves whether the bra can hold its shape in stormy conditions – we wouldn’t want the product to lose its eeerh .. holding qualities. It wouldn’t do to have a clothing malfunction when he’s on the green tubing room would it now.

Not surprising that the Japanese product chappies have moved there first, or the Chinese, never could fathom the difference between them myself – bit like the French and the Flemish – they’re all the same when you turn them upside down and ask them to whistle.

Nevertheless we think that a new approach is quite the way to proceed. A size range might be useful, and an indication as to what the blonde chap might be wearing downstairs, if you get my gist. Be nice to see the whole ensemble.

We’ll respond in the fullness of time.

‘ You blokes are so far up yeselves your toes are sticking out of your ears. What’s this concept bullshit? What’s that got to do with flogging a bit of Chinese made surf gear to an idiot with a hundred bucks to spare. 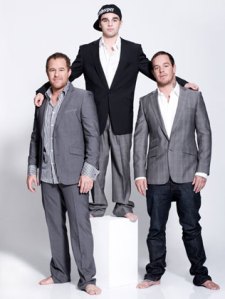 Marketing approach? You want one? Howabout if you come into my shop and don’t buy something I kick your fat yank arse across the road. Just for starters. We don’t do soft sell, and we don’t wear anything that fits either you pommie pansy.

Shoes? What shoes ..!?! That means matching socks and laces, who needs all that poncy shit.

– and who’s going to listen to a seppo about making a dollar, you blokes haven’t owned your own country for twenty years, the only thing you’ve ever done that rates a mention is export Bourbon. Oh yeah, and ParisH, bit on the boney side  but a great    . . .   friend. She’s got a few quid too which is handy on the weekends, unlike you pathetic dills. If you had another dollar it’d be bloody lonely.

Fair dinkum if we left it to you fuckwits to run surfing fashion the game would be on the bones of its arse in six months. Yeah, I forgot, it already is. The only way you’d be making a buck then would be to fill the shop with girly wear and jap jewellery.

Oh yeah, I forgot, you already do that.

–  thanks for coming by – here’s your hat, and what’s your fuckin hurry.’