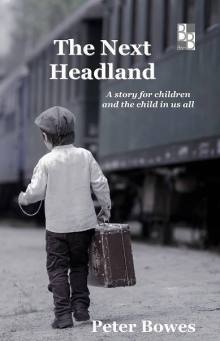 “Six-year-old Toby has to leave the only home he’s ever known to go and live with his grandfather Tom in a remote part of the New South Wales coast near Moutrey Point. Fourteen hours away by train, the south coast’s towering seas, ferocious storms and swirling seabirds are all unimaginable to a small boy who knows only creeks and shallow dams. Toby and Tom have only met once before, but gradually became inseparable as they deal with their grief, share adventures, survive perils and carve out a whole new life together. Tom has many things to teach his small grandson and discovers along the way that he too has much to learn. This heartwarming story for children of all ages is by the Australian author Peter Bowes who has previously published fiction for adults and a fictionalised account of the still-unsolved Somerton Man case.” Bennison Books.

“I truly enjoyed Peter Bowes new book. Bennison Books is marketing it as a children’s book, and I think it works well for that purpose, but adults are going to enjoy it as much as any child would.

What I liked most is Bowes’ portrait of New South Wales through the eyes of Toby, an orphaned six year old who, because of a car accident, ends up moving to a remote part of New South Wales to live with his eccentric grandfather. The book is built out of incidents: a large shark swimming beneath Toby and his grandfather as they fish in their dinghy, a wild storm that threatens to blow a metal roof into the sky, a search for a gold mine where a wild dingo lurks, threatening a small boy who rarely wears shoes, but the incidents build and build into a story that culminates in an ending sure to melt your heart.

What is especially appealing to a midwesterner is the wildlife portrayed in the story, the strange kinds of fish, such as a trevally, the half dingo, half dogs that are residents at the cabin where Toby and his grandfather live, pythons and other snakes, bloodworms, and wallabys, among a host of birds, some, like the sea gull, familiar, others, like the cockatoo and parrots, more exotic, at least to my knowledge. The aborigines in the story, like Monty, are also wonderful to meet.

This is not Harry Potter, filled with pulse-pounding adventures. Rather, it is a portrait of people and a place that brings alive just how unbelievable our planet and all of the wildlife, flora, fauna, fish, and humans are. The story, in the end, gets to you, climbing to a place in your spirit that makes you say to yourself, “yep, I’m really glad I read this.” Tom Davis.

“I’ve just ordered another copy of this book so I can give it as a Christmas present.
It’s a life-affirming story of a tough grandfather taking on responsibility for an orphaned grandchild he scarcely knows – his protective love and the six-year old’s growing familiarity with the characters and environment of a remote Australian coast. Totally unsentimental, utterly convincing.
I bought the book because I’ve enjoyed previous work from Peter Bowes but I rather expected to have to skim through quickly, thinking it was principally for children. I soon slowed down to soak up the detail.
I also found that it can be appreciated on different levels. An adult for example will interpret small actions not explained and infer a whole world of dangers and uncertainties; a child will miss these but follow the small boy’s discoveries in an exciting environment. What for example was the dog that came to drink right next to the boy out in the wild, and why did the grandfather go into the bush soon after? And who exactly is Monty?
He tells a good story in an easy voice, does Peter Bowes.” John Looker.

“His short vignettes in Bloodlines are visceral, teeth rattling, funny and even true, and they stretch from then to now and this horizon to that, from the poetic to the poignant to the hilarious.” ~ Sean Doherty, author of My Brother’s Keeper and MP: The Life of Michael Peterson, both published by HarperCollins.

“Although I majored in English Literature when I was at university I rarely read books anymore. Since they invented families, the internet, emails, surfing, motorcycle riding, friends, drinking and so on it is such an effort to concentrate on anything as time consuming as reading a book. And I’ve read so many of them they mostly seem the same to me now. With fiction in particular I find myself just not caring what the authors think or write anymore. I generally picture them as unattractive fat pale middle aged people wearing track suits with unkempt hair and too many cats who have not showered for several days sitting in their gloomy houses desperately typing away. But not Peter.

Peter’s book is interesting and entertaining and funny. I first found Peter’s work on the internet, where he was causing trouble on a surf report web site, infuriating other reporters and patrons alike with masterfully and originally composed accounts of events often peripherally related to surfing but rarely dealing with the actual surf conditions that day. From time to time there were massive arguments about what to do with Larry, as he was then known, often because of the difficulty or irritation his long stories could cause those trying to simply check the surf quickly, as opposed to reading 750 words on a Byron Bay abattoir or the surfing hierarchy in Bondi mid-last century. Peter was a dangerous intellectual in that world, and I loved the way he used the internet to expose people to his work who would otherwise never come across it, whether they liked it or not.

He was and is however also an incredibly talented writer who draws from a vast body of influences but has his own unique and unmistakable style. He is never boring and always entertaining. He paints a fascinating world drawn from his life experience with masterful composition and perfect comic timing. If you read only one book this year, it should be this one. It is certainly the only book I have read this year.” Alex R

“I have been reading and delighting in Pete Bowes’ stories since I first encountered them as “Larry Stories” on Don Norris’s Real Surf web site many years ago. Amongst occasional surf reports Larry or Pete would post these reflections on life that had the capacity to deck you and have you sit slack jawed at the excruciating pathos they so often contained. These are magical stories but not for the feint hearted. The beautifully nostalgic tales of early years at Byron are balanced with the chilling reflections of predatory beach-side adults in Patience.

His narrative is there to cast across us the full suite of human emotion and his understated, crisp writing brings it home with unique power. Beyond the Break did me in in 3 pages. Typical of Pete’s way. He doesn’t spare the pretentious, the bullies, cowards or superficial, amongst others. What a rare treat to work one’s way through this collection.” James B. 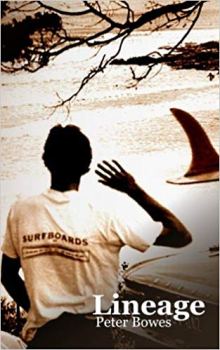 “We all know these people, see them on the streets, meet them, avoid them, want to know more about them. Bowes writes without judging, and by drawing us in to see others’ lives from the inside, we, too, are less inclined to judge.” Bennison Books

“Generations is the final volume in Peter Bowes’ trilogy of essays and stories, the first two being Bloodlines (2013) and Lineage (2015). Bowes continues to entertain, move and surprise us with his subtly acute observations of life in all its manifestations. His writing is often at its most affecting when documenting the lives of those who otherwise come and go as we pass them by with barely a second glance.

Here, we meet the ‘woman by the side of the road’, her home a dilapidated caravan, tormented by nighttime noises and cars pulling up outside to terrorise her while she tries to sleep; Ronnie, the alcoholic ‘been a single bloke all me life’; and an unnamed man turning up for a reunion but finding no ‘special old friend because there was no special young friend forty-five years ago’.

However, the author is no less skilled at making us laugh as well as appreciating the simple joys and satisfactions of friendship and shared experiences: the delivery of dog food to an Italian restaurant causes unforeseen chaos in ‘The Best Food Available’, while in another piece, an overheard conversation about a man with three thumbs takes on a life of its own.” Bennison Books.

“This is a book that doesn’t want to be pigeonholed. In part it is crime fiction because there is an unexplained death to which this book provides an imaginary backstory. It is equally a tale of espionage and counter espionage that brings in the security services of Australia, the UK, the USA and the USSR. And it is the story of the war in Southeast Asia and its aftermath.

It is not a ‘literary’ novel but it is a well-wrought page turner with well-researched background colour and a convincing narrative. Nothing would induce me to spoil the plot but I would advise readers to have patience.

The early chapters move about from Hong Kong to Singapore to Indonesia and beyond, introducing a wide cast list and there are many puzzles: who are these people, what are they doing and how do they connect? This is no simple whodunnit. But Peter Bowes is an accomplished writer of short stories and his short chapters paint such convincing scenes that the story slowly comes together like a jigsaw.
There is also a lengthy afterword which sets out what is known about the actual body on the beach and which shows just how baffling was the evidence. It’s quite fun to look back at Peter Bowes’ story to see the use he has made of the many bewildering clues.
The author’ style is accessible: conversational but literate. There is suspense but also wry humour. I plan to read it again some time, possibly on a long haul flight – the time will pass very quickly.” John Looker

“This is the most impressive and detailed presentation of a transcript I have seen from a donor.”