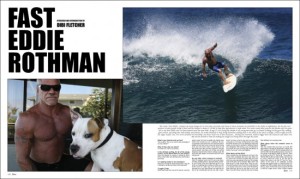 This is probably the finest example of a cutback we will ever see – Nevermind all this sycophancy about Curren and Parkinson and the rest of those haole wimps, those white faced pretenders, those pathetic baby wave riders – Eddie has got the moves.

Observe if you will the ownership Rotto has of the wave face – and despite what looks like an attack of old man’s knee that is still a pretty good whitewater fling. We are however a little worried about the slight hunch about eds’ shoulders, it almost looks as if he’s waiting for a smack from somebody on the inside, somebody like Ian Cairns.

Kanga was known for having a little extra juice and his onrail cutback is due for a mention here shortly, as soon as we can find a suitable pic.

However we must commend Mr Rothman for the portrait shoot here; we have the muscle, the shades, the pit bull, the tight smile , the tatts, the torso, the buff, the half shave, the attitude – all that is missing is the make-up girl who put it all together.

Getting back to the subject we must admit that there is not a lot of buried rail in the manoeuvre though ed, and not a lot of confidence in body positioning – the whole thing is looking a bit like a topple under our hard scrutiny. The trailing arm is going for the sky hook and that isn’t a sign of confidence; it might be a little fat but did you make it ed?

We judge it risky.

Rumour has it that ed and his pals were responsible for policing the line-up over there on that American island from time to time, a little discouragement here and little suggestion there, nobody quite welcome – pity they missed the Japanese surprise visit in 1941.

Good firm lads though with a liking for tradition and local justice, like lots of surprise night time visits to make sure the visitors were spending their funny money in the right places.

Fast Eddie was a character in the novel ‘ The Hustler ‘ written by Walter Tevis, who later was responsible for another novel called ‘ The Colour of Money ‘ which was made into a movie that starred Tom Cruise.