the cronulla riots – only a surfer knows the feeling 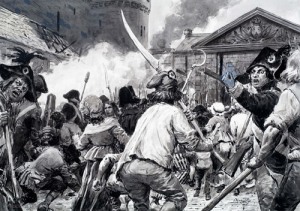 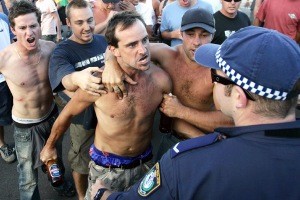 Scene 1 – Jimmy has a grievance.

This is Jimmy, he’s a bra boy. Jimmy (James) is a surfer.

Jimmy thinks that the best way to go forward in his discussion on the racial merits of our muslim brothers with Constable Mick O’Hearn is to have a bottle of beer handy just in case someone gets thirsty. Jimmy is accompanied throughout the exchange by –

Behind Jimmy (James), on our left, is young Monty (with the neck jewellery) – like Jimmy he has a something to say and we are liking his sympathetic show of intimate apparel  – particularly given the lovely satin job James is sporting. So comfy when things get stormy.

Directly behind James is Wayne. Wayne is taking the opportunity to admire the breadth of James’ shoulders – Wayne is like that, he’s a bra boy, he’s a lover, and who knows what he’s wearing under those cargos. No mattter, whatever is making him happy on this day.

The third chap hanging off Jimmy’s shoulder is his brother Phil – Phil is waiting for Constable O’Hearn to draw the spray.

Our man has had enough – The only way to end this thinks young Jim, is to smash an empty beer bottle over the copper’s head – An excellent strategy given the collective IQ of all present. Smack it down and just walk away – copper on the ground bleeding and Jimmy right up there in the b’boys rankings – no fucking worries. We’ll all be high fiving the Commancheros MC before the day is out.

Wayne has maintained his position though and we admire his sexual fortitude and the doggednesss to keep on his game, despite the distractions.

Scene 3 – Jimmy’s does his bottle.

How calm is Phil, how that transcendental smile overpowers the tension, the lad is an iceman. The older paler fatter boofhead who has appeared over his left shoulder is Abdaman, the Sgt at Arms of the Notorious M.C. and he apparently has some items on his mind that need a little ventilation, like a GST rebate on amphetamine purchases.

He should put his leather jacket back on as he looks a little out of order with all the other toned bodies. This is not a good day for the Lebanese Look. A man should plan ahead Abdy, think it through.

Wayne has gone for a quick bicep feel as he probably realises that time is no longer on his side – Better than nothing old son, Jimmy will never know.

It’s all over, even Monty (on the left and with the jewellery) has moved up a rank for a few final admonishments, Wayne perservers with his fond attentions and the crowd rankles and mutters away.

Jimmy presents a truly feasome sight here as he maintains the grip on his weapon. We can presume that he is warning the entire NSW constabulary, the state and federal judicial system and all the parlimentary processes that he is a bra boy and that shit don’t mean shit on the streets of cronulla.

Word has it that Constable O’Hearn called on young Jim early the next morning, and after waking him up with a fatherly shake gave him a few sharp lessons on how to arm wrestle and finally advised him which other state in this great nation might benefit from his negotiating skills.