lennox be my lover today 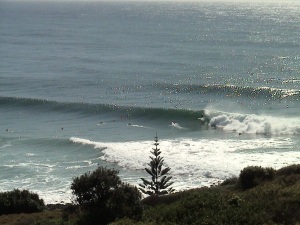 We should go to Lennox today, after we pick up the brush-cutter

This is the good wife speaking at about 5am  this morning – magpie time.

Things begin quietly out here – plans are easily made – the brush-cutter (whipper-snipper) is needed because of the rampant invasion of a neighbour’s weed plantation.

‘ The swell is on the way up and who knows, they might let an old mate like you have a set or three. ‘

Knowledgeable woman here, product of forty years of bliss and fifteen surfboards racked in the house.

The car’s idle speed started going nuts at Flat Rock, the head gasket cook kicked in at the airport road turn-off in Ballina, and the smoke became visible outside Mick’s mower shop on Southern Cross Drive.

Mick’s the guy selling the brushcutters. His mate Andrew works out the back and has fixed tractors and ski-sleds on every continent on this earth, rides a fish.

He’s hoping for an early mark today because of guess what.

‘ Buggered, ‘ says Mick, Andrew wanders over, he’s cleaning up already  the bastard, he nods,  the NRMA is just down the road, ‘ head’s done mate.’

We stand around the open bonnet like assistants at an embalming – the thing is dead, or as good as. Me and my new best mates. When’s the funeral.

Alf is the local NRMA, his grandson is out at Lennox tearing things up as we speak, he has pictures of the little bloke all over the walls of his office – This is not funny.

Alf uplifts the half dozen hoses around the radiator and judges them all as inferior – ‘ Radiator’s dry, ‘ he says – ‘ Engine Management thinks that no water means more heat hence the plus idle back at where? ‘

‘ Flatrock says I,’ knowing that that place is probably a line of corduroy by now and full of old men on longboards having a really good time. More bastards!

Alf points me over the road to Les’s Auto shop, ‘ car’s probably rooted.’

Les is a little bloke on the phone, the auto shop is littered and greasy. Only one car on the hoist and his offsider’s car is over the monkey-pit with, dare I say it, a big mal on the top deck ready to go.

Les unscrews the gasket cap leans over and takes a few deep sniffs,  Les has a nose for a head cook they say, like a bloodhound on the trail. Could be a relative of that unholy pothead next door, must ask him next time we meet on the fence line. Smoko.

The wind turns west, and gets warmer. I begin to itch. Lennox Lines. Lord have mercy.

Les goes foreign on his diagnosis, maybe this – maybe that – $88 an hour for a maybe on the problem and we get a lift around the block to meet Dave who runs the local Hire-Car business out of the airport.

Dave is thirty years out of Dee Why – and need I say, has his board on his car and is about to head to The Point when we show up for a rental. Man of few words is Dave, man in a hurry. Probably a bloody goofy-foot.

So here we are in a clapped out Magna with no bloody racks, $50 a day for a week, and now everybody knows what’s coming off that synoptic onion – A cruel thing this life, at times.