the holy rolling righteousness of haste 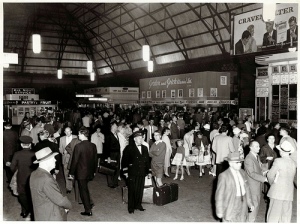 Dennis Islay, better known in the city by his tag DisI: This is I.

The little brother of a family of eight – Solomon Islanders, father absent, two older brothers lost to Harley Davidsons and the highway bastardry of outlaw gangs.

Dennis Islay is thirteen years old and today is his day at the Town Hall concourse in Sydney – all day. Dennis and Haleish, another youngster, Malaysian born. Parents devout, son not so.

Not everybody at the underground concourse is there to catch a train, some take their lunches down there, others brouse the papershop shelves. Darker corners shelter abandoned men aground in their filth and all around them is the holy rolling righteousness of haste. Buffets of warm air rise up from the deeper tunnels, old re-breathed air, and the earthquake rumble of speeding trains comes and goes like the breaking of seas at night. All unseen.

Here be drunks and absconders, paedophiles and junkies, judges and lawyers, the soiled and the pure, and in amongst them the clever rats of opportunity who know that most pain comes from biting infected flesh.

DisI is a dark haired boy, lithe and quick – almost pretty. Haleish is much bigger, a solid lad with his twin black rat tails tied together by a black silk ribbon. The underground concourse and its labyrinth of walkways is their yard. They know its inches.

DisI is in the papershop by the magazines, just brousing through this and that, his eyes down, and in a while he feels the slight brush of a coat as an older man moves in close alongside him. Just a get to know you touch, and they stand side by side for a half minute.

The older man has his hand in his pocket, the pocket nearest to the pretty boy, and as he slowly withdraws his hand DisI looks down and sees that he is holding a twenty dollar bill there.

Just the corner of the note is visible, this is the way it is done here. The invitation and reward for the boy to follow the noteholder to the intimate privacy of a toilet cubicle.

The toilet where other men stand in the urinals for hours waiting for other boys, or other men. Pressed up hard against the tiles and in the foetid air of expressed waste they spend lifetimes feeding an appetite that only grows more voracious.

The older man waits, he is patient and doesn’t see Haleish move up close to his blind side, though he feels the massive stamp of the big lad’s foot on top of his own and as he yelps and turns towards the sudden and excrutiating pain DisI snatches the note from his hand and nobody questions why two boys would be whooping and laughing so hard as they run up the stairs and into the sunshine.

DisI was killed two months later when he leant too far out of a train travelling from Town Hall to Chatswood – he was decapitated by an railside iron stanchion.