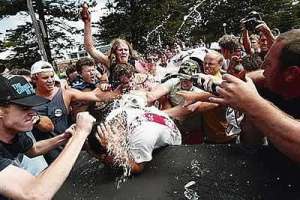 This baby is back in the news, one of the big day pics from Cronulla five years ago. Now there are some folks around here who see some artistic merit in the layout of the shot, they want to exhibit the work. So it needs to be looked at.

We can do this. Because without a doubt at least four of these guys are surfers. From the left: The dark cap, then white cap, then the man hatless, then the big unit with a beer. These are the lads who have been burned a hundred times by Brazilians, broken their best board on a bad wave, play A Grade, rated low at work a thousand times, rootless / shiftless / worthless / useless surf bums. Who hasn’t been called that ..

The artistic merit, which we are obliged to get back to, lies in {the capture of} the infidel symmetry of the upraised arms spilling alcohol, the insanity of the gabbling attack, the murderous club of a bottle that will shear on impact – and stab. Then you look at the outsider, way down there. He’s not cowering at all, he’s waiting.

This is how it happens.