fragments of a book. the attack. 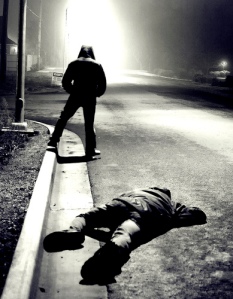 Thursday evening and the city was being buffeted by a humid and soaking southerly gale. The floors and entrances to the subterranean malls and stationways of the Town Hall station were wet, slippery and crowded.

Wet footfall and the rustle of damp overclothing. Everybody moving fast.

Raffan though stood quiet under a stained sandstone colonnade within site of the bike racks and watched for Hobbs. As arranged. The urine stink that seeped out from the gardens of ferns and aspidistras there saluted all those who passed by, some of whom sneered knowingly, attributing the ammoniac and sour odour to the big unkempt man standing near its source.

Hobbs thought that the three Asians running toward him down the wet footpath were heading for some shelter from the downpour so he moved aside a pace to let them by. When the knife thrust from the one with a cropped ear bounced off his right thumb knuckle and stabbed deep into the soft flesh of his left armpit he yelped in surprise and fright – turning wild eyed to follow his attacker around – then he looked down in wonder at his sliced hand, the exposed bone and new lip of slit flesh there.

Quick blood splashed onto his trousers. A devastating fire burned under his arm.

The Asians were a few feet away now, they had turned and were watching him in the steady rain; two were looking into his face while the third – the cropped ear – was crouched much closer and lower, watching the heart wound and the blood that flowed from it. One hand hidden under his jacket.

Two uniformed schoolboys splashed across the road and ran between them.

A sharp and scolding pain had run hot through his upper arm and Hobbs looked down again and saw the rip in his jacket. He jerked his head back up in a frightened panic and felt his scalp wrinkle in cold horror as they were upon him again. As quick as cats. Killing to a choreography. One kicking, one hitting, one stabbing.

With his knee kicked out Hobbs fell hands down onto the ground, looking at his own blood puddling there, taking two fearsome blows to his temple and throat on the way down. He heard his own rasping sob very close as his body locked up numb, then a car horn sounded away in a distant black cavern.

A hoarse scream threaded through, chasing away the last of his consciousness.

Raffan bit down hard on the Vietnamese’s nose and his large black-nailed fingers gouged , kneaded and sought the struggling man’s larynx. He had already broken the attacker’s arm and wrist and now they rolled on the wet earth and under the lush civic greenery that bordered the sandstone walls of the Town Hall.

The silent struggle stopped at the same moment the man’s thyroid cartilage horns were crushed, and Raffan immediately sought a stronger bite on him and with one violent growling toss of his head he tore a greater part the man’s nose and lower face away. Then he slowly raised himself up from the ground, listening for sirens.

The Vietnamese’ struggles slowly ceased and he lay swallowing and gagging as warm blood bubbled away down his face and into his wragged mouth. Raffan stomped onto his face once. Ground his boot heel  down. Hard. Until the man’s skull crumbled in like a cardboard box.

Two hours later, sheltered and showered at the Matt Talbot Hostel in Woolloomooloo and wearing a new set of clothes from their store, Raffan patiently waited for his dinner as two greasy haired Kiwis practised their prison billiards in the games room.

The dead man’s knife was tucked snug down by the side of his boot and he had a tooth missing.

Tags: hobbs and raffan
From: Works
← fragments of a book – travelling with an australian
leg ropes, how they betrayed us. →
6 Comments Post a comment