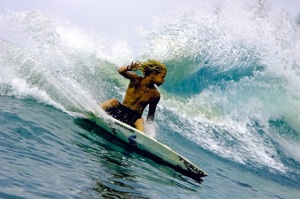 This is a child here, right? This little chap who would be weighing about as much as a SUP. Which is about the only thing they are good for, SUPs, weight and size comparisons.

The rail is buried as deep as Billabong, half of the board is underwater and full of acceleration, and even on this fat shoulder there is a high-discharge wake from both his hull and outside fin. His knees are righteously knocked; the forward is the one half in-charge of direction and the other balances rudder (fin) depth, weight, acceleration and the other half of where Juan is going  – later it will change sex and drive Juan – Juan back around.

Legs are the busy ones; arms need not be waved about.

Check the line from his chestplate to the mid-point between his knees, and his upraised arm is neutral, relaxed. Right angles do that. Euclid knew.

The kid is in the spot. and he’s just come out of another spot if you look at the slice he’s just cuffed off the wave back there. Say we roll the shot backwards if we could and see the three common options he would have had available with the lip folding above and in front of him. The stuff everybody does, they think three is about the limit.

Like a Mark Sainsbury 1969 floater over it, a TC jam 1989 cutback under it, or something acrobatic in the air above it. 2012. Which is especially watchable these days on Fuel. Again and again. Meanwhile the wave keeps breaking and the flipping surfer isn’t on it. That means he’s doing something else flipping about up there, but not JuanX2.

He’s done a Colombian neck-tie on the wave. Cut its throat. Kids have all the attitude lately.

Tags: colombian necktie, Cutting Back, dumbth chronicles, Euclid, juan juan cutting back, raul caliente, right angles, stand up paddleboards, SUPS, where's the problem
From: Cutting Back, Works
← what you need in order to get a good job is a solid employment record. like mine.
how the surfer in you knows he’s dying at the office →
3 Comments Post a comment