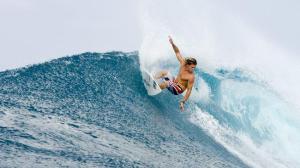 A fine example of the concentration of weight to that area of the body that is the least sensitive – the arse – a technique long used by the two australian nuggets TC and occy, both of them infamously big on the backside.

What is immediately noticeable here is that AL has taken his following arm out of the paradigm as it were, it’s just hanging up there weightless waiting for an instruction. I see no real drive. The arc he has committed to on the wave looks a little premature as well and is most probably the reason why he appears to be looking down for a speed spot – and the wave looks a little too fat for such optimism.