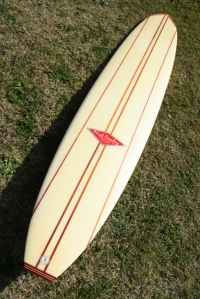 First thing you have to do is look at the hands, the fingers then the the balancing mechanism in place with the lower and upper arms – the central placement of the head and finally the body-torque.

Mick is floating here, he has jammed the back of the board down hard and then swiveled on both his back foot and the big fin and at the same time lifted half of the thing out of the water. How’s that for doing five things at once. No need to skate around a fat little face when you know how to pivot – and if you have ever been lucky enough to see this bloke surf you would know that as soon as he has got the board around level he’ll take a walk up to the tightest trim position he can find before drifting back to the tail and whanging the board around again.

The board he built. I have two. Lucky me.

Longboarders these days like to switch feet when they cut back, we judge this to be a very poncy manoeuvre, it’s all knock-knees and looks like a dance move. It’s a kooks choice and the easy way around. I don’t see anybody doing this ^ manoeuve anywhere, even up here at Byron where the waves are so easy you can surf them with your eyes closed.

Here Mick has his head pointing south, his hips looking west and his leading foot turned north – he is so in balance he is able to neutralise the weight in both his arms and just stretch them out and feel the air.

That’s ^ about as pretty as Kate Moss on a catwalk.

Backbeach gossip has it that Mick meets up with Andy (Longplay) Cochran, John (Wheels) Williams and Ron Adler every now and then and they sit around and lie like sailors.