warren cornish – after the funeral 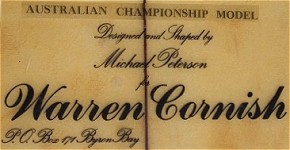 He sometimes came by Mrs Browns in the morning and stopped down at the bottom of the road early. Blat .. Blat on his car horn, his Holden station wagon. Warren was the only one with a station wagon and the blat blat was for get your arse to the Pass. Sometimes it was for Broken Head and he was always the first to know, and here’s me and Algae with an old rusted black VW to get there.

A fellow named Pete Green told me that Warren had died yesterday, we were outside the Lennox paper shop and I’d just jibed him because he was my age and looking ok in a Jacobs Tshirt. So two old surfers got talking and he told me. Pete Green knew Warren well, they had worked together for many years.

Later that afternoon I walked past another no-name old man watching Lennox sweeping by, and said to him  – ‘Can’t wait to get out there can you?’ –

That was Curtis, first name forgotten and we’d never met before today.

He was from Bondi. He used to live in the flat above Tshirt TerryF, and we got to talking. The names sped off the list, Cochran, Bluey, Scott, Magoo, Head – and here he said, ‘Who was Head’s best mate?

Well that was him, and there were more. You don’t ask if anyone was still alive, comes the time in life when the answer is always melancholy. But we talked about Warren today.

When we left each other we didn’t just shake hands, we clasped them.

Somebody walked up to Bob McTavish and interrupted him as he was having a conversation with three people, he excused the interruption and took McTavish aside – said this to him:

‘I was told many years ago, Bob, that when you were young and extravagantly vain you were heard to say that nobody knew how good you really were because they couldn’t see what your feet were doing in the white-water.’

McTavish nearly blushed, and declaimed the quote as hardly being true. ‘Too bad mate,’ he was told, ‘you’ve been credited with it.’

A man cornered an old gent being wheeled away in his chair, a friend of Cornish – the old boy couldn’t speak but the lady assisting him said he could hear ok, and he was from Cronulla, and he was ok for a chat. So he was told of the Bulli tomato fight, and how it was a car full of Cronulla surfers who got hit instead of Maroubra. And that Cornish, aged 15, was one of the tomato tossers.

Then there was the Sydney girl, the one who told of Cornish wanting to drive a car so bad he changed the birth date on his birth certificate and got a licence at age 15. Then he bought the car. She was 14 at the time and she had the seat beside him. Today she was sitting beside me, and there was something familiar about her.

I mentioned gidget, and she smiled. Like women do.

Warren’s sister gave his eulogy, she said his faith was practiced in the Church of the Sky. She spoke of his hidden generosities, his good works. His steadfastness. She also read a few excerpts from one of his early diaries, where he showed the spirit of the times.

No shirt, no collar, no city. He would have none of them.