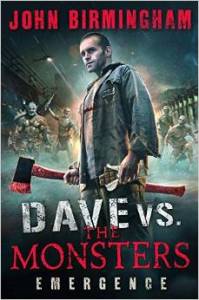 Birmingham thinks up this stuff in his dreams and then sells enough bookbricks to build a convention centre*, every year. I’ve read plenty of them and then given them away to builders and dog trappers, we were his real fan base. But now he done two things that has set half of them free.

Dave is in America for the book, and because he’s dealing with Americans Birmingham has to write some yank dialogue. He hits it up on about page 5 – Female helicopter pilot to hungover Dave, on his way back to the rig, which is infested with cannibals from the centre of the earth.

‘Oh, Lord, no! Bump uglies with you Dave? I think not. I mean, y’all are purdy. In a grizzly wore-down kinda way. But the way you tomcat around, I wouldn’t let that penile biohazard of yours anywhere near my unmentionables. Probably just about ready to fall off by now, I’d reckon. I shoulda made you leave it back on the grass with your breakfast, or dinner, or whatever that nasty-looking mess y’all upchucked was. You know the company rules about flying with hazmats.’

That was it Johnno, I couldn’t carry on and closed Kindle down, but with me just being being banned from the Burger I had to let you know how I felt about it by Amazon review*. But I missed something with the cover you have here, the English edition cover, all those smart poms with software and paintbox.

Look at what those bastards have done to Dave, his ax hand.

You haven’t paid these blokes yet, have you?

it’s been a pleasure

the one star review *(I turfed it, Birmingham and I are mates, again.)

* Brisbane style, thin-skinned and without substance.

Here’s a late thought: when they change the pic so Dave has actually got his hand around the ax handle, this poster might be worth a quid –