me and the duke of edinburgh

The Outward Bound School was founded by Kurt ‘ The Rod ‘ Hahn, a German born Jew who respected the views of youth yet didn’t mind handing out punishments to those he thought unworthy. 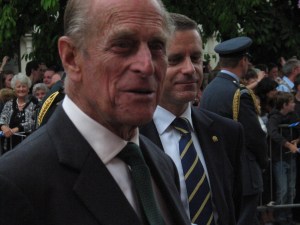 The Australian OB school was opened in 1956 at Fisherman’s Bend, just around the corner and up a long reach from Milson’s Passage which is itself is a just a couple of miles upriver from Brooklyn, a half hour north out of Sydney by train.

Brooklyn, named after the yank engineers who built the Hawksbury River bridge. A ragged little town built around oyster leases and on top of mangrove mud. Mosquitoes and shitpans brimfull of blind maggots – rivermen and their secrets. The bedlam at Peat Island, the madhouse built there without any containment walls.

We would motor on by the island, see them standing up to their knees in the mud just yards away and howling at us, men and women – unclothed. So permanently wretched. The few who survived the river crossing scattered themselves up into the high sandstone gorges and died alone in the caves up there that still showed fire sign on the blackened roofs where the Darugs once sheltered. Bones upon bones.

The Hawksbury school has a Wikipedia entry which lacks just a little preciseness in that there is no mention of the seven boys who drowned on an expedition on the Hume Weir in the winter of 1963.

Laid out on the ground in the rain while we sheltered near a fire. Their faces up. No mothers to cover their sons from the ignominy of such an early death. We warmed ourselves and looked over at them lying there, over there. White and dead. Cold but not cold.

This was after the Duke met me. That summer morning at Circular Quay. Sunday.

My father sent me to the school for a month’s course, sent me to learn – to learn obedience, to learn respect, and to straighten the fuck up. I was eighteen. Hair too long, friends to wild, habits too bad. Drunk and disorderly. Disaster.

In 1963 the Queen and Prince Philip came to Sydney and arrangements had been made for him to hand over a ex RAN motor boat to the school on a Sunday morning, the morning after the course ended. The morning after a major celebration at the Watsons Bay Hotel where old habits were resumed and old friends were gathered.

We stood in two lines, all the Outward Bound old boys and their instructors. Philip came down the Brittanias’ steps and commenced his informal inspection, looking left and looking right. Everyone in suits and ties, standing at attention, respectful. Smiling.

That lad there .. ! The one without a tie or a coat, the one with his hair over his collar, him!

He walked over quickly and looked down and said hullo, looked hard into the lad’s eyes and asked a few questions – What do you do? Where are you from? What do you want to be? – and always this half smile on his face. Here’s a man worth knowing.

– and a hundred yards away, behind the wooden barricades where hundreds of people were gathered my mother is shouting – ‘ My son .. ! He’s talking to MY SON   ..!!

He wished me luck and walked on.

Ed Reid was standing with the other instructors at the end of the lines, he too had no tie. No coat.

Years later we toasted the husband of the Queen, sat in the dark lounge of a Sydney hotel, Ed and myself, both of us older and even more unsettled by the life and how it had evolved since that day.

Like marriage is this life – it surely is for better or for worse.