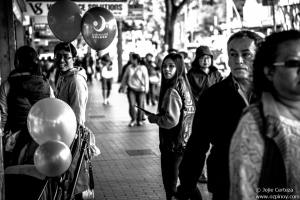 Like those five fellows a-squat on the footpath on the town side of the station crossing, watching who’s coming off the trains this morning.
– Sharing smokes, passing a call on a mobile phone, passing a mobile from hand to hand.
Lazy moves all around but with eyes like lasers as they irradiate the tourists, the locals, the shoppers and the customers all heading across the road towards them.

The boys looked a little like some of the Northern beaches locals do on a good day when you roll on out to their spot uninvited.
None of them have anything to GIVE away, despite there being plenty of what they got to go around.

– And they were all still there five hours later, on my way out. The money must be ok.

There was the hatchet faced man with the big arms and blonde by his side who spun his dead eyes up to mine as we approached and passed each other outside the Water Dragon, and who kept them there for a whole lot longer than I needed for a guy I didn’t know.

What the fuck did he want?

All the toilets in the Cabramatta Pub are locked all day. You have to ask the bouncer for an unlock so you can take a leak at eleven in the morning.
No needles says the sign above the dunny door. Jab away all you like outside is the message.
The people who run the gift and variety shops have eyes in the backs of their heads and relatives on chairs down the back of all the aisles.
I walked through a newspaper shop that didn’t have a Surf Magazine in the rack.

Our culture travels about as far west as does the nor-easter in summer.

The only cop I saw was surrounded by four tourists and he was telling them that no way would he buy lunch at anyplace around here.

These three guys belting through the train carriage looking for another guy and catching him down on the bottom deck and giving him some memories to remind him not to do again whatever he did in the first place.

One of them IN MY FACE on his way back.

From: Works
← the art prize rip
history →
No comments yet