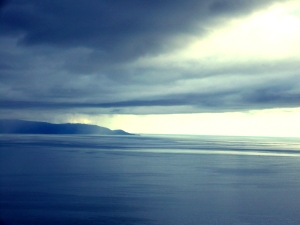 John is a big old man and he may have rolled a tractor or a horse over one of his legs in earlier days because he swaylimps his way through town every day on a bent leg – He’s just another brown old man waiting on the grave.

John’s at the age when he knows the trumpeter is finished with his practise and is ready for the show so I told him I would write this.

He was standing underneath that gimpy Norfolk pine just north of the Pub at Lennox and was sawing at it with an angle-iron gaffa taped onto a long bamboo shaft – the pine was all nubs up to about twenty-foot so the old boy must have been up to it for a while.

‘ Why don’t you just chainsaw the bloody thing down? ‘

Well that got his attention and he lay his weapon down on the ground and we started the natter – He was a hard looking man, big handed and gruff and he looked down at me, unsure. I’m not that pretty either.

Talking to old men is easy, getting them to talk back is another matter. It takes one to know one.

John has lived at Lennox for over 50 years – he arrived in town a year before we rolled up from Sydney on the wave of exploration. His father had a farm at Rosebank, back west and in the hills. We had nothing but hunger and greed and the tracks we laid are now highways.

So I wrestled him on, him standing by the mutilated pine with his bamboo and iron, me lower down on the park seat feeling for his language, watching his mouth and restless hands – both of us wearing sunglasses. Where is the manner of men that demands that sunglasses be lowered when conversation is commenced.

I was approached once in Avalon by an African girl who asked me to subscribe to a relief fund for Ethiopian war victims, and when I lowered my sunglasses to talk to her she thanked me for showing my eyes.

John would say something half funny but you’d have to wait a little while until you saw the beginning of his tight-lipped smile.

We bitched about this and that, two old boys  – and after a spell he gathered it up into his chest and looked around and felt the wind and looked at the sky and then bent a little lower at me and said a little more softly for he was a hard old bastard and I had to beat the wind to listen to his words  –

‘ I want to come back and stand here on this spot in one thousand years. ‘

Tags: John, Lennox Head
From: Lennox Head, Works
← andy c and the bikini bottom
wealth, it knows me not. →
6 Comments Post a comment