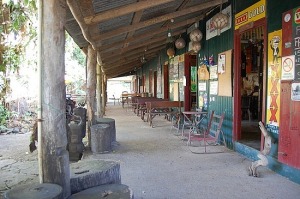 Grub steps out of his car and walks barefoot across the dusty yard and into the back door of the Pub. He passes through two large rooms on his way to the front bar, their long counters silent and their lights unlit. A pool table stands heavily gaitered and dustcoated in the centre of one room and a small chalk scoreboard nailed to the wall has the name ‘ Jacko ‘ written upon it.

He buys a schooner from a barmaid with bright red nails and rollers in her hair who’s sitting with one buttock perched upon a stool. She’s listening to the races. The backs of her legs are exposed and have swollen veins as big as worms under the flesh.

He walks out to the front of the building and sits on a long wooden bench set against the wall, in the shade, next to an old man wearing a wide-brimmed hat. Beyond them, beyond the carpark, long bleached fields rise into the pale forests that crown the distant hills. The hot air weighs heavily. The only birds in it are caretaker crows. A dozen of them are sitting in a spotted gum nearby and they curse eachother tiredly.

Grub is on his way to Adelaide, coming down from Noosa and travelling alone along the inland route, being unable to afford a licence check in any state.

Sleeping on an old mattress in the back of his car at nights with only the whining mosquitoes for company.

The undersides of his arms are freckled with bites, some have had the itching flesh dug away and they resemble bloody little smallpox craters.  Swift settling bushflies cluster in the wounds and feed there.

He snafs them away with a slow wave of his hand.

Grub has got the streaming fucken shits, very little cash and the ‘85 Falcon Station Wagon that he lives in is making bad noises even when it’s over there in the carpark.

The Insight 6’2’ tied onto the roof has yellowed badly in the three weeks he has been travelling and molten wax has dripped off the deck and pooled onto the car hood. A thousand highway bugs have died there, stuckfast husks with their transit lives windblasted away.

The radio only plays static; the tape deck worked for half a day.

The back window is jammed and immovably half open, half closed. The interior is littered with knots of grimy trodden down clothing and sour towels, newspapers, fast-food dog boxes and empty plastic coke bottles. A blowfly’s litter of maggots knot and unknot amongst the forgotten leavings of an old dinner in the passenger footwell and an offering of feathers teeth and coloured cloth hangs from the rear vision mirror. The dashtop vinyl has peeled back like the blackened flesh of a sun-ripened corpse and exposed a thin layer of yellow plastic insulation.

He is many days unwashed and his clothes are stiff with dirt and the stink around the place is the Grub and no other. Grub as he has always been.

The soles of his feet are as black as the highway, the calluses on his heels hard as old leather, and his gut boils a rancorous stew of bad food and ill sentiments.

Grub drinks half the schooner in two swallows and with his head rested back onto the brick wall of the Pub he watches the small marbles of black oil drip ceaselessly from the underside of his Falcon and pool there in the shade. The old car settles on one slowly deflating tyre and clicks its hot steel in overheated exhalations.

The dealer was a lying fucken arsehole wearing gold rings on all his fingers and a smile yards wide. He gave Grub a full tank of gas to swing the deal and even waved him goodbye as he pulled out of the yard.

Grub turns and looks at the old man. The old man is looking at the car. He turns and they look at eachother.

‘ Whatsat on the fucken roof? ‘ The old one asks.

‘ Thing on the fucken roof, fucken deaf are yez? ‘ A toothless mouth denies the old man the quick grin he intended.

‘ What board? ‘ asks the old man in the wide brimmed hat.

‘ Surf fucken board, ‘ says Grub – getting a little pissed-off. Brushcutter!

The old man looks away and stays silent for a moment, considering the kid’s insolent nature. He ponders on the deep need an old man has for some respect from a young man. He looks down at his hands. Gnarled, big veined and still. His wrists thick and square, his forearms – sleeved to their elbows – are deep with knotted muscle and bound through with cablelike sinew.

Here and there on his knuckles are the faded scars of old settlements and hard won arguments.

He gets up and goes inside to soon return with another schooner. He sets it and himself down on the bench and fingers around in his shirt pocket for the makings.

Grub’s beer is nearly finished; the old man’s glass is frosted and full. Condensation makes its traceways down the fluted glass and onto the surface of the wooden topped bench which is faintly marked with an interlocking maze of hundreds of rings.

The heat oppresses, bears down. The crows have gone.

‘ Me names Ernie, ‘ the old man says, ‘ from Roma, ‘ he pokes a thin made smoke into his whiskery mouth and squints over at the kid. ‘ Smoke? ‘

Grub takes the makings from Ernie without thanks, slides out a pair of papers and sticks them together. Then he drops a nub of tobacco onto his palm and tugs a small plastic bag from his jeans pocket with his other hand, he pokes out a little sticky marijuana from this and mixes it in with the tobacco. He rolls the slug into the papers, licks it up and gives one end a final twirl.

Ernie watches from under his hat and pushes over a box of matches. He waits for Grub to light up the twist.

Grub takes a deep pull on the smoke.

‘ What’s what? ‘ he says, holding the smoke down deep. Letting the rich blood of his lungs take on its careless passengers.

‘ That shit you put in with me tobaccy? ‘

After a bit Grub blows out a thick grey plume.

The old man takes off his hat and carefully places it on the bench, brim downwards. He rubs his hands around each other, they make a dry whispering sound. Parchment on stiff parchment.

He cracks a couple of big old knuckles and stands up. He drops his smoke onto the ground and steps it out.

He walks over and stands in front of Grub.

Respect. If not given, must be earnt. Family motto handed down by Grandfather Cec, boundary rider, fettler, drover, tent boxer.

The kid slouches there with his bare feet thrust out, scratching at the scurf on the back of his hand. He takes another crackling suck of the joint into himself and casts a lazy glance up at the hatless old man who stands there quietly overshadowing him, whose eyes are not quite so kindly now.

By the end of the day you will know this lesson well; there was another of hard-handed Cec’s mantras.

Ernie examines the upturned terrain of Grub’s face for its weaknesses and sees the close-knit family of them all.

Jaw too weak, nose too bony, cheeks too brittle, eyes too slow.

‘ Who are you callin’ a fucken dope you little arsehole? ‘

Later, after the barmaid had roused herself and given him some paper towels to stop the bleeding, Grub left the Hotel.  Ernie was back and sat on the long bench watching him from under his wide brimmed hat, another full schooner by his side and now a russet coloured dog lying at his feet.

A fine red dust gently filmed onto the surface of the oil puddle as the ragged blare of the ‘85 Falcon faded to quiet.