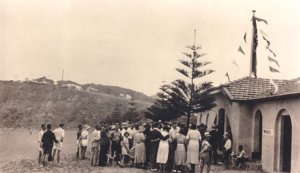 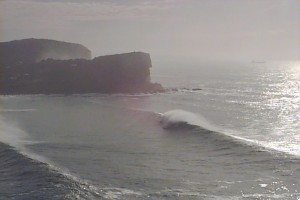 ‘ Fucken mind? ‘ said Ken as he watched Scoresby hosing himself off well inside the Avalon Surf Club this morning.

‘ Wanto move out here a bit sport, leaving all that water on the floor in the shed is a bastard to walk on when a bloke is trying to go home without a dose of footrot.’

This is Ken, 1st man to surf the reef on the other side of BarrenJoey after the war, out there on a toothpick on his own, paddled out from the Pittwater on a punt that something was breaking over there when the ’48 tempest was closing out Sydney Harbour from head to head.

Ken likes a grumble these days. This is ok; he has righteousness on his resume.

Scoresby has just paddled in from North Avalon, reducing the mob of 50 to 49.

And he pulls up a crate behind the old boys gathered there on the club apron, Doug with his troubled shins, Ken fossicking about like a woman in a kitchen and Angus trying to outhink a rum hangover – after a decent while they ask the young bloke what it was like out there.

Though Scoresby isn’t a boy anymore; fifty grunts a day to keep his guts flat and 300 daily grab and wrenches with a pair of housebricks to keep the shoulders from sagging and the forearms from wasting away. Not to mention the fence runs to and from Barrenjoey and back 3 times a week, trying to match B Morris. Avoiding the queers – bastards are everywhere up there.

‘ The waveskier inside of me was the arsehole of the session today,’  says Scoresby .

‘ A bloke can sometimes sit wide at North Av, ‘ he continued as if nobody else had ever had the pleasure, ‘ there’s always a few wide ones that prop up and wind away on the right day and if a bloke can resist paddling all the way inside for the glory set then he should be sweet, providing fucken Leggo isn’t out there, that bastard won’t let anything go.’

Right now Doug decides to pull back the dressing on his ulcer for a looksee, and the swollen wound swallows half his hand before some babe wearing a black lace hanky strolls past, all silky wobble and perve.  We observe the moment with a tranquil and hormonal grief as Ken retires into the dank shadows for another piss. Five an hour isn’t unusual but who’s counting.

‘ The bastard let five waves go by before I called him off ‘ (This is Scoresby, slightly hoarse now, as the black lace is joined by the white thong and legs to the neck)

They (the girls) spread their small towels and long limbs and settle down to relax like naked women do in front of a boatshed full of men who have spread their hot and speculative seed from Tangiers to Baja. From Korea to Vietnam, from Bondi to Collaroy.

‘ Bastard wouldn’t go on any of ‘em, so I suggested he either use his paddle for what it was designed for or jam the fuckenthing up his big goatboat arse. ‘

About six young boys race past the entrance intent on the massive Christmas high tide shorebreak, kids whose bones don’t break, breakneck laughing young surfers – into it for a smashing! The last one is grandson number 3, and he doesn’t notice me watching what him and his ratbag surf rat mates do in the shore bash.

The waveskier had parked his car alongside mine. We had left the water at the same time.

I kind of apologised. Ends up he’s not a bad bloke, down from Evans Head for a week, says I should look him up next time I’m up that way.