euclid, toilet tiles and one percenters 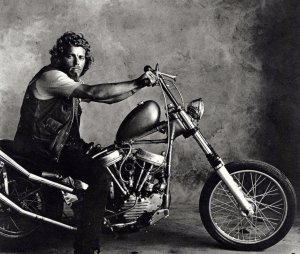 It is a long way from Sydney to the Northern Rivers by road and too often a driver’s concentration takes the Alzheimer’s option after the first few hours and flips to scattered thought and freewheeling associations – follow me here as we travel this path.

There is some reckless endangerment .

They are always there, somebody cleans them once a day, they are the result of a long forgotten skill and there is a defined  and minimalist architecture to the older examples – like the Macksville RSL , pictured – I defy you to deny that there is a mathematical reasoning to the trigonometrical layering of the transverse border tiles here.

This is obvious to anyone with a basic mathematical education after all, Euclid – the father of geometry –  as imagined by Raphael in his The School of Athens , has the entire class crouched on tiles.

The relationship between the two is perfectly defined – and the picture at ^ is my homage to this great master of conic sections – the sandals are of course are a nod to another great influence, the stoned sixties as we cannot possibly have one without the other.

Now in order to have you be at one with me in this odyssey you must place yourself in the gents at Macksville this Euclidian day with your iphone pointed at your feet. The room of course is empty, but as we know there is always the danger of someone coming through the door and misconstruing what confronts them. Such are our crowded hours.

What is little known amongst travellers of our great highways is that they are used on a regular basis, and particularly on weekends, by large groups of large men on large Harley Davidson choppers – These are not your pretend bikers with blank jackets, these are the caravans of the wicked  – the criminal and the brutal – and they sometimes need to take a leak when they come through Macksville. Some learned opinion has it that these great caravans are a delivery mechanism for the delivery of large quantities of weekend pain relief to the smaller populations outside the cities – fifty men on bikes, only one holding – and just the one highway copper.  I don’t see they have a problem. 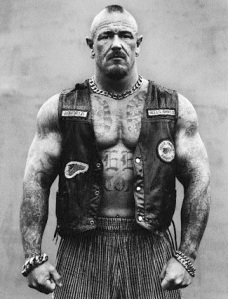 This is Andrew S., he wrote a barley readable book with Sonny Barger and we can all relax when he’s dead but in the meantime I can recount with virtuous truth that the Nomad biker who ploughed through the shithouse door when I was snapping off the tile pic looked just like his twin brother if he had one.

Here’s a bloke who likes killing people and doing very criminal things and here’s me taking pics of my feet in a toilet. A collision of antecedents. We could not help but observe each other just for an instant. I was the only one fighting back a smile.

They all watched me as I left the building, dozens of them standing around their bikes with their women, but I sensed a respect as we drove away, for the violent have always deferred to the daft.