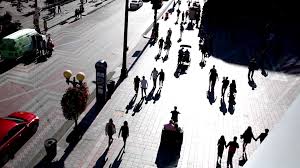 Looking down at the street from the fifth story, the one that runs east to west along the back of the apartment houses, you notice fashion. Colours. What the people passing by are wearing down there. Otherwise you blank off.

A man walking east with the sun at his back: a man as black as his shadow.

He was wearing a ragged black coat tasseled at the hem, black trousers bunched on top of black boots. Shirt: black. A black and white scarf wrapped around his face that from the distance looked like a skull, and a knockabout black trilby sat crookedly on his head over long black hair.

He walked by, under me, crossed the road and stepped into the shadow of a couple of trees that occupy an unused three-car space of a municipal carpark.

I thought he might have been looking for somewhere to come back to later, perhaps to sleep, because he stood there in the shadow a while, as still as a rabbit under the gun. Under my gaze. Until he disappeared. Was configured into the shadow of leaves and branches.

To reappear a moment later, and continue on his way.

From: Ballina, Works
← in recent days
the fairway →
No comments yet