the cowboy and the plumber

In the hills, water connecting pipes can be measured in kilometres. They run through neighbouring properties and under their grazing paddocks and fences and when the water stops you hope the break is handy to the surface. So you go looking.

The meter sits in Wayne’s top paddock, the one where he keeps his horses, beautiful things they are and they all came over to see me after I got under the wire and started to walk towards the leak. All six horses had been drinking from their new spring for enough time to turn the ground around the broken conduit into mud so after I rang up Wayne he rolled up in his backhoe after scooping up a blade-full of horse shit from his yards on the way.

I didn’t ask him what it was for.

The plumber arrived, young bloke, fit, name of Giles. He came for a looksee then went back to his truck for some gear.

Wayne and I watched him go.

‘Fuck no,’ said Wayne. ‘I like to look over their shoulders, it makes them nervous.’

Giles returned, dumped his gear, squatted by the break and began to work; Wayne over his shoulder with a thin little smoke jammed into his mouth. Tidy sort of bloke is Wayne, not big but as lean as one of his horses. When he was about nineteen he told me once, he went to America droving and stayed three years on the Colorado trails. 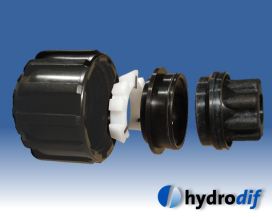 ^ This is what Giles needed for the job: a Universal Transition Fitting.

^ and this is what Giles brought to the job: a Mains Water Pipe Joiner Coupling.

After watching the youth struggle for ten minutes, Wayne squatted beside him and gave him the bad news about the couplings. Then the news got worse because the only place that sold the right stuff was over Lismore way.

Giles left to go get it.

I went home for lunch, Wayne had his on the backhoe and we met back up on the hill and hour later. Giles was already hard at it so over I go and join Wayne looking over his shoulder. The kid was perspiring, he was having big trouble disconnecting the Hydrodif fitting ring from its transition ring.

‘Can’t undo it, got to get something.’

The kid put the problem on the muddy ground, stood up and walked over to his truck.

Wayne picked up the connector, turned it this way and that then reached back into a little pouch that hung off his belt and pulled out the Boker Classic* he uses to clear stones from his horses’ hooves. Lovely looking blade it is too. Wayne keeps all his stuff clean.

He popped the jammed ring, turned to look where Giles had got to, spotted him by the truck and whistled once, like he does to a horse when he wants it to look at him.

Giles turned and looked at him.

Later, when everyone was happy with the job Giles departed and Wayne climbed onto the backhoe, fired it up in a cloud of oiled smoke, drove it over and dropped the load of horse shit onto the new pipe and couplings. That done, he trundled down the incline a little way and scooped up a couple of yards of turf, brought that back and dropped it onto shit-covered couplings.

Two hours later we got dumped three inches of rain.

Next week the ground will look like nothing ever happened to it.