being a schoolboy surfer in 1959 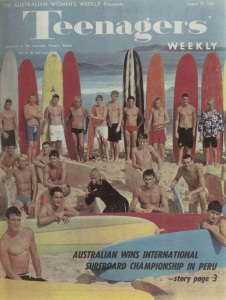 There is much to regret.

{Meaning of insolence (noun) pride or haughtiness exhibited in contemptuous and overbearing treatment of others.}

We invented both the word and the underlying meaning of the word, we used insolence as our weapon and we honed the blade sharp and often. The ten of us in a school of about eight hundred. Waverley College. Less than 4 k’s from Bondi and only ten surfers in the school.

Waverley College was ruled by large men dressed in heavy black robes, some of them gentle, others brutal and all of them equipped with a one metre long leather-bound metal-cored punishment strap manufactured by a cobbler in Charing Cross, a man with his own special problems. These straps the Brothers hid about themselves in their sleeves or tucked into a belt or pocket somewhere and when the hitting time came around – as it did often – we used it to practice our insolence.

We were punished for being absent without acceptable reason, whether it be a whole day, a series of days or a couple of hours. We were punished for not attending weekend rugby or cricket matches, swimming meets, training afternoons, athletic competitions, handball comps, tennis matches – six almighty strokes on the left hand and then another six almighty strokes on the right hand. Wielded by a fully grown man who grew angrier with each blow, so much so that the last few landed on inner wrists and forearms. The price of surfing. That’s why we were absent so often.

Here was the time to sharpen our insolence, when the dull whack of hard leather on flesh was the silky rasp of a personal blade upon whetsone – and never a trembling or looking away because the master of a punishment is the one who receives it without flinching.

The grown man and the sixteen year-old boy in the midst of a public welter, because all punishments were done in full view, then we walked away with hands too swollen and numb to hold a pen, with bruisings to the inner wrists and peculiarly bent fingers. Deep abrasions that took days to heal. Some straps were thicker than others, heavy, and others were skinny and rigid. Some Brothers took great pleasure in the pain they meted out, why else would they smile? Others softened their blows or discounted the number of them.

They didn’t see us run cold water over our throbbing hands and arms, and they didn’t hear the few words we spoke to each other over the sinks, the wry smiles.

We had the sea. We were surfers. 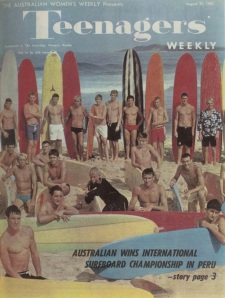 In later years we were all reconciled, and the Faith held firm.