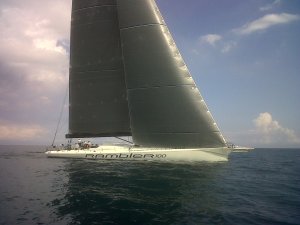 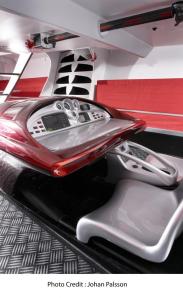 Below decks, the nav station

Less known is what a small shed in Bassett Street Mona Vale produced between the years 2000 and 2010 – Ocean racing yachts like Alfa Romeo three (pictured) for instance.

Not the style of yacht that is rented out to the likes of some readers who take their hedonistic pursuits into the Indo islands, but one that caters for the biggest end of the marina, the billionaires club, where really good fun costs really good money. One Russian outfit wrote cheques for over $12 mill for a boat a couple of years ago and the T-shirts are hardly worth wearing.

There is a tradition with owners and builders where every yacht has its own T-shirt and everyone in the shed gets one for free when the boat is done, they are usually handed out at the launch booze-up and some of the better educated owners also split for caps and bags yet a boatbuilder will never wear a boat’s T if he didn’t have a hand in the build.

That’s integrity and something that the surfing corporations will never achieve in their marketing campaigns.

This yacht ^ has its navigation station modelled after the Alfa Romeo Sports and is the work of an unsung genius named Steve Moxham – a modest fellow who would much rather be fishing the offshore reefs than sucking up composite dust and putting up with bone-headed apprentices. The Moxham family are big in the oyster industry further up the coast in the Hawkesbury River so you’d think he would show up with a sack from time to time wouldn’t you? … never happened.

Steve witnessed the Broken Bay Heads closing out a few years ago in a massive storm swell, he reckoned the breaking wave faces were over 30′ .

The interior was designed by a fellow named Jono Morris, a part-time Manly longboarder with little surfing talent and an architect with an over supply.

The story here is all about innovation; ocean racing yacht design has a life expectancy of about eight months, they are climbing all over themselves to get the boats to go quicker with less weight.

What remains a constant is the men who sail these machines, rough nuts like the bloke pictured – Tom Braidwood. Veteran of many Sydney Hobarts and Volvo ’round the World races.

Tom told the story of a Sydney man who had a yacht built at McConaghy and he specified that a full set of weather, route and wind gauges be installed at the foot of his bunk so he did not have to get out of bed to  see what the weather was like or where his position was.

When the boat was undergoing sea-trials he called the boatbuilders down to the dock and complained that the dials were unreadable – ‘ Can’t bloody see anything, ‘ he griped. Everybody had a bit of a look, saw nothing out of order, asked him what the fuck he was complaining about (client or not, this is how winch-wankers talk to each other). So the client climbed up onto the bunk and laid down, ‘ See what I mean?’ he said, ‘My feet are in the bloody way. Fix it! ‘

So fix it we did, nothing like withholding the final progress payment on a build to get what you want from the builder. 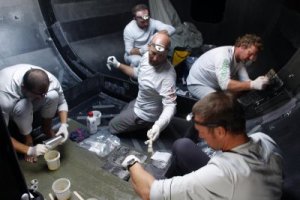 Braidwood, he’s the nude nut in the centre there