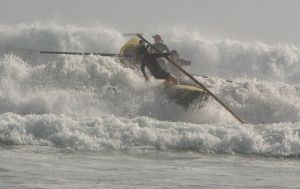 Mick Jacks is a Japanese-speaking Tour Guide working out of the Westin Hotels Group in Sydney.

Mick’s a bus driver, a documentalist, a raconteur and grade A spiv with deeply convincing credentials from both Bronte and Bondi surf clubs.

Sharp looking coot is Mick these days with his glossy Gold Coast silk shirts and slim waisted old levis, his big arms and golden smile, his squinty fucked up grin that nuggets out lonely women and pretty girls by the bedfull.

The Westin Group has 5 buses servicing the northern beaches and Mick’s is the only one with tapes of Neil Young singing in Japanese. 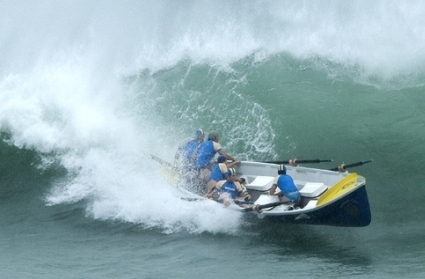 Pulling in, (aka panic stations)

Sunday at North Avalon and a ten-foot northerly swell is throwing up cupped bowls at Lobsters that stretch peel and race all the way down to the 2nd pathway.

There are over 50 combatants in the water, including some pathetic ring-ins from Newport and Narrabeen and the R Millar surfboat sits like a predator three hundred yards to the east of the pack.

Manned by serial killers, sponsored by environmental rapists; the killer boat floats like a malevolent water spider in the far and heaving deep.

Mick meanwhile has parked his bus side on in the front row and is giving his Japanese customers a candid view of the unfolding proceedings.

‘ You will notice, ‘ sez young Mick in his faultless Japanese, ‘ that when the surfboat eventually commences its homeward voyage on the largest of the swells the rowers will be loudly  regaled by the other surfers for their seamanships skills and daring. They are much admired for their courage.’

The set of the day looms and the surfboat crew crabs three oars and almost lose the half slab as they scrabble for their seats.

The sweep, manfully dealing with a suspected prostate and a superhuman urge to vacate his bladder silently disgraces himself and his Mambo Cargoes as he slowly squabs the boat’s bow around to face shorewards.

And three hundred yards closer to the beach the hungry pack of boardriders distributes itself into a scattered and potent line of eager participants.

Their already muted talk ceases as all eyes measure up the incoming set of at least 5 set waves of over ten foot. Every one of them. Oh happy days.

And every one of them extremely non-negotiable.

Top over racing and feathering top to seaward is a loose surfboat manned by five cold blooded assassins, all but lost in the deep troughs and pointing towards and through the mob. Who know what’s coming.

‘ Like an Emperor ‘, sez Mick to the tourists, ‘ the surfboat has right of Royal Passage through the waves; see how the surfers closer in wave and shout exultations.’

The R Millar came roaring through the lineup on wave three.

Vertical enough on take-off for everyone on the beach to see every seat and every thwart on the boat.

And every oar held firm as the crew reared back rigid, feet pointing deep south, until the sculptured bow split the boat’s descent and came off vertical with a twin sheet of bow-waves higher than the sweep’s head.

‘ Like a Kingdom of Skill, said Mick to his uncomprehending audience,’ when these boys crack it right a man has to re-organise his surfing priorities.’

Mick Jacks married his favourite Malaysian hostess couple of years ago and retired with her to a small riverside home on the Brunswick River where he pretends to be a writer.

They have four children who roam wildly in the mangrove forests.

‘ Two things I know,’ he said to me last time we met,’ watching a surfboat ploughing through the pack isn’t that much different from trying to win a rugby maul.

There’s going to be blood and misery out there, pain and humiliation; but after it’s all over some kind of kinship can develop between the sides.’