the corporation and those who dwell in it. 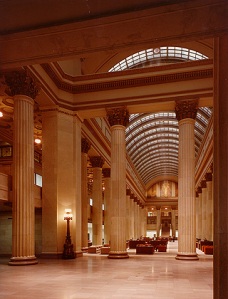 The Crusaders may well have had to deal with Muslims, Pagan Slavs, Jews, Russian and Greek Orthodox Christians, Mongols, Cathars, Hussites, Waldensians and Old Prussians – We have to deal with the Corporate Infidel. That man woman or child whom it is our daily bane and punishment to have to work alongside.

They are Legion and they know not of the Sea or the Ocean or the habits of those who have suckled at its salty breast.

See him at his numbers:

No cubicles for these despots. Privacy is their luxury and primacy their objective. They have the sly and professional inquisitiveness of beach inspector who pretends not to watch the lone woman changing her clothing under a towel. They move around the corporate floors like phantoms, all knowing, all seeing. They have mastered the art of hovering with intent. Nothing you have said goes forgotten, they are students of spatial mnemonics and have the morals of Hannibal Lecter.

They have a working knowledge that surpasses all others in the corporation. It is theirs to know your salary, your medical cover, the entire range of sicknesses you have succumbed to over the whole of your employment together with the proportion of them that were taken on Mondays and Fridays when compared to the other and less attractive weekday choices. They are familiar with your professional attitude and have perused all your appraisals.

Accountants who have not used pencils for over fifty years yet have all of their fingernails crammed up hard with a thick residue of ancient graphite.  They never suffer sunburn, they have never bought boardshorts. Close inshore surf baffles them and in summer they drown in satisfiable quantities not dissimilar to the number of rabbits exterminated by myxomatosis in the early 1950’s.

See him at his coding:

Listening to one of these individuals is like hearing the entire sub-continental Indian population of call centre employees talking at the same time. They are at the best of times difficult to comprehend and are only saved from complete banishment by their handsome appreciation of obscure musics and late night drug habits – this is the 60’s mind.

The IT manager’s choice of sports is sitting alone at one of Star Casino’s Multi-Choice linked poker machines with five dollars in the bank and pulling it off at one cent a time, one line a time.

Unlike the Accountant who invented this pastime as a means of tickling his almost dormant sense of fun to life, the IT manager does it knowing that the imbedded software in the machine will eventually fall over as the consistent absence of graphical image flips on the screen whilst the machine is in constant use on a ‘minimal gamble’ is a known cause of expensive software failure and the machine’s almost terminal malfunction.

Befriend at own risk.

See him at his Powerpoint:

Marketing managers always used to surf and always in a variety of exotic locations that are rarely emphasized in detail and are constantly interchangeable.

Marketing managers –  known recreational abusers of every alcoholic, anti-depressant, antipsychotic, anxiolytic, hypnotic, analgesic, inhalant, hallucinogenic and enthogenical substance available on the surface of the earth – are never permitted to be on a committee where accountants predominate as the primary sources of known cross contamination have yet to be determined.

Ignore him, he will go away.

A man or woman of no consequence in the corporation. They are like the voice on the beach broadcast system warning of rips and undertows. An unwelcome and regular distraction making a lot of noise about what is bleedingly obvious, and like the wretched broadcast they may well not be of recent human origins.

Only good for signing off on procedures.

Beware: here sits the Gisele Bundchens, the Kate Moss’s, the Carla Brunis of the boardroom. Immaculate and untouchable, all knowing and entirely protected.

She leaves a faint trail of Chypre fragrance throughout the upper floors and its teak paneled offices and it was her you saw sunbaking naked at Kings Beach four years ago.

She is never seen arriving or leaving the building, she appears not to eat and her wardrobe of silks and chiffons and fine weave merino suits renews itself every day, day after day, without repetition.

The only associate in the corporation who has ever been seen publicly with her on his arm died coming off a successful solo summit of K2 three months later.

– and you will die wondering my son.