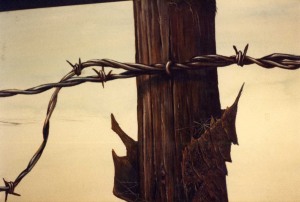 Neville Tees stood almost motionless by the old wire fence separating the carpark from the low scrubby dunes that spread untidily out into the beach.

He stood there breathing very deeply and very slowly.

A large, menacing aura of stillness surrounded him, and the only parts of his body that moved were his great hands as they slowly coiled then uncoiled the .33-guage heavy fencing wire from around their fingers – an action that gradually uprooted one of the iron support posts that was nested in concrete and buried deep in the sandy ground, and had been for over thirty years.

Neville stood silent and passive as two oily rivulets of perspiration slicked down his bare back. They ran from between his slabbed shoulder blades and down into his heavy denim levis as he watched – slit-eyed – the miserable one-foot slop that the slight onshore wind was pushing onto the sand.

Children were playing there.

The fifteenth consecutive day of benign conditions and an almost unendurable test of his patience.

Neville’s white F-100 Ute Special stood carelessly parked behind him with the door agape. The back of the driver’s seat was stained dark with perspiration and the chassis creaked loudly as the hot metal contracted around the eight-cylinder engine. An engine hissing with a deep tiredness as it discharged a rosary of thick black drops into an ever-widening pond of opalescence under the differential housing.

His new and practically unused surfboard was tied loosely over a tarp that covered the jumble of his tools. Tools that he had feverishly hurled into the open tray only an hour and a half ago.

Neville was a builder. Had been for thirty years, man and boy.

He had just driven eighty-eight kilometers to the beach from a building-site in the mountains on the strength of a call from a friend who predicted that the swell was on the rise, and the wind had changed.

The friend was not in sight.

The temperature was over thirty-seven degrees.

The swell was not on the rise. The air was dead.

And the aura of heat that surrounded Neville was discernible only as a slight wavering in the hot air about his shoulders and head.

The iron post skewed and lifted. A barb in the wire, unfelt, ripped along the hard quilted skin of his palm and tore out a long strip of flesh. Sweat crested from the stone rampart that was his forehead and rolled down into the forested and ginger depths of his upper lip and from that bushy overhang the large drops of effluvium fell as a cannonade of monsoonal rain does from a bamboo awning onto his scarred brown working-boots, darkening them.

A couple of bush flies fed there on the salty fluid.

A small child walked by distracted by the sight of this brooding behemoth.

An attractive woman waiting in the air-conditioned luxury of a Mercedes 500SL for her husband to shower and change drew down her gold tipped cigarette in four long crackling pulls without taking her eyes off his back.

A Taiwanese tourist took his picture.

– And the Ute’s driver side back tyre slowly expelled itself of all its air.