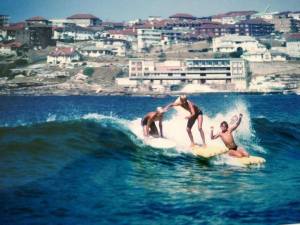 Mick Dooley and I sat around a restaurant table at Manly today and had a three hour lunch, wives in attendance, fish and oysters on the menu, old times the subject and most everyone got a mention.

Andy Cochran rang halfway through the first course wanting to know how Wheels Williams was going. Not good I heard Mick say, the old lad is fading. Wheels is due in Aus this week to farewell his old friends, the pity is he may not remember some of them.

Then we spoke about Gordon Woods, who remains fit and well. Then Farrelly, Scott Dillon, Wally the Walker, Gary Moffat, Kevin B and the brutal destruction of his young life .. ..  old surfers:  bankrupts bastards and good men, their names inscribed on the permanence of thin air.

Old men have these conversations, fatal as they are, and for evey death of an old friend we remember a young friend, and all of us surfers, wedded to the waves.

About a year ago Mick felt a pea-sized lump under his ear and a week later a surgeon peeled off half his face to remove it. Joe Dancer come to play his end game.

So many of us gone, wandering the deserts of eternity, waiting for judgement.

Mick and I were both sent to the same boarding school when we were very young, fathers just returned from the war. He stayed, I ran off and came back. That is our bond.

I’m sitting in an apartment overlooking the surf at North Steyne. It’s rubbish out there, the sea blown to buggery by a south-easter but there are at least thirty surfers in the water trying for a bit of speed and space on the close-out faces, kooks mostly, from every nation on earth.

All they want to do is ride a wave.