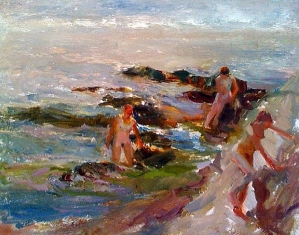 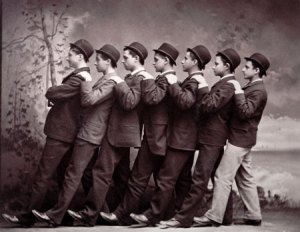 all actors are silly buggers

I write this letter with profound regret and in the fervent hope that our relationship, already many years old and until recently seamless in our mutual objectives, will not alter in any degree.
Commercial or otherwise.

However, as the Managing Director of ‘ Home and Away ‘, arguably Australia’s finest dramatic attempt at portraying true surfing life on an Australian city beach, I must draw your attention to what we can only consider an insidious attempt to demean our Palm Beach Production of this ground breaking dramatic series.

(1) The initial ‘ Heads Up ‘ agreement signed in 1996 (clause 9) explicitly stated that the Surf Club was to be cleared of all mature members at least three hours prior to the day’s shoot.
This provision was agreed purely as a precaution, given some mature member’s propensity for wandering about the place in the bollocky whilst looking for a sunny spot after the chill of a dawn bodysurf.

Please, these old men are NAKED ..! This is not a wholesome influence on a series that relies on the significant sexual growth of 12 year-olds – one glimpse of a naked dodderer and the make-up van goes right into overtime. Think of the kiddies – please!

(2) This same agreement also stipulates (clause 11b) that no Surf Club members have the right to avail themselves of any of the specialist gourmet catering facilities provided for the cast and crew of ‘ Home and Away ‘
We work hard at our craft and deserve the best that our shareholders can afford us, including the use of public facilities. Taxpayers are a tiresome burden do you agree.

(3) Agreed car parking facilities are being abused.We specifically request that the owner of (a) A Holden Rodeo Ute, Northern Territory reg: FAR.Q cease his habit of leaving his locked down vehicle on the club forecourt. We also request that the driver of (b) A 1958 Land Rover reg: DONK be dealt with soonest. Whilst we allow a certain drive through on shoots, we are irritated by this individual’s constant circuits of Gov. Philip’s Park during working hours. We would also appreciate a little less volume on Eric Clapton’s Layla during his circuits.

Home and Away prides itself on being the cutting edge of cinematic Australian Surfing Life and we have spent many thousands of dollars training our attractive male leads in the intricate manoeuvres required to beat the curler, or ride the lip, and catch the cylinder tube.
Hanging ten and rad air floaters are a commonplace existentialism in our vision, as are greenroom freakouts and layback pigdog skeg poppers.

However we will not be undermined by a handful of young intransigent locals who feel that they can just paddle out and catch waves in front of our corporate commitment of portraying beach life as it really is in this lucky country. Surely there exist a council by-law forbidding such blatant exploitation.

(5) With a degree of frustration, we also bring to your attention yet again the habit of some fishing members who feel that they can leave the detritus of their overnight catch on the floor of the shower room.

(6) Could you also please assist by removing the Pamela Anderson ‘ Running Free ‘ series of stroke posters from the shark tower.

I remain, as always, your obedient servant.

Tags: Home and Away, Palm Beach, Summer Bay, Works
From: Works
← the necks
doug, the hopperman →
No comments yet