stu nettle and the tripkick 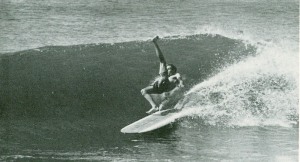 Some blokes, you know, did ballet with their sisters when they were kids. Just for a couple of years, until the message appeared /  what the fuck am I doing here?  /

Stu has answered this message with poise and ability – as captured by Jack Pollard in about 1962 {?}

hard to know – so long ago.

This is an early lay-back, high-kick, arms-free, aerial backdraft power-boost. Not everyone was throwing this chicken in 1961, and the judges at the NSW Titles at Bondi in ’65 must have missed Stu’s heat that day – he did one of these on waves 2, 3 and five in the heat he lost and everyone I know thought that he had a chance at Brennan that day, and Nat. Big chance!

We like the lines here, everything is either up down or side-ways. That’s how Stu surfs. He’s the reason they invented helmets for surf photographers. Plus I’m thinking that a deck-pad might lessen the hurt of what’s coming up for the poor bastard.

And we are are acknowledging some tension in expectation of the answer to the question you guys must be asking yourselves right now – is Stu still on the way Up, or Over, or the way Down?

So we called it the Tripkick, trip for triple and kick for whaddya reckon. {trippin’ dude} The 2 years of suburban ballet classes – that’s every Saturday morning in a summer twice over – has come home.

– and this dance-chappy needs about double the angle to get near you mate.