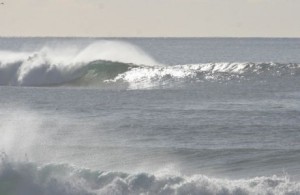 Marcello is a Brazilian, a native of Mata Atlântica, a child of the ocean, a surfer, and he wanders the chic streets of Avalon village and wonders to where the stoke has travelled.

He steps away from the path of the lovely women with multiple children who squall in their portable child carriages. He stands aside for the outsized men who dictate the footpath, and above all he smells the ovenbake of the over sweetened cakes and soft bread from the villages’ many bakeries.

Marcello – the great grandson of trawlermen – has come to Australia to ride the warm Pacific swells, he has three months to run on a 457 visa concocted by a family cousin in the Immigration department, his car is temporarily incommunicado and the three old men who have befriended him at the local coffee house have long convinced him that The Green Island must be surfed before death or marriage. Whatever comes first.

Skinny old boys, with the salt of the Pacific ingrained in their faces and their rapid fire denigrations of each other’s abilities in the surf, their amiable self-ridicule and brutal invocação  – Homens da aldeia  – just like the old men of his village who loved their café and chisme.

Marcello is employed as a cook in the local fish and chip shop, an abomination of old fish and sour fat. Marcello cleans himself every night with a hard bristle but that is not enough to scour the stink of cheap vegetable oil from his body. The owner is a Calabrian from Filicudi with no sense and bad teeth, his sons never smile – their mouths impossibly small for bodies grown so large – and his wife is an oven-witch every day in the kitchen.
The kitchen!
Madre de Dios! It is a wonder the customers live to come back again.

They travelled down to Conjola in the old one’s Mercedes, the richest of the coffee drinkers, a hombre de negocios, and they took two vans on the lakeside where they could hear the rumble of the sea, like approaching thunder.

Darkness came early that first night and Marcello, in gratitude, insisted on cooking for them all a traditional Easter dinner from the fishermen of Porto Galinhas. Pescado frito con anchovie. Cooked on the beach.

He took a half dozen fillets of freshly caught and boned snapper and rubbed them all over with a creamy paste of softened butter, crushed garlic and anchovies.
Then he rolled them in fresh breadcrumbs and cooked them in a frypan with a little hot olive oil. A pinch of chili flakes, a slice of lemon.
Completado.

Some fresh bread, a little wine, and the incandescent warmth of an open fire.

The old men awoke late the following morning, and, as was their way, walked slowly up to the top of the dunes to see the conditions. Plenty of time today, like all days, their hours not numbered as hard as do the youngest amongst us.

The seas were majestic, breaking wide of the Island in a grand and stately succession of power.

–    and there .. ! The distant white trail of a surfer gliding down the black face of the fourth wave. The biggest of the set, and all but lost from sight in the rising spume.

Marcello, unmarried and alive, and alone.

Tags: 457 visa, Avalon, Crumbed Snapper recipe, Green Island, I never knew a surfer who could cook, road recipes, Works
From: Works
← the kimono girl ~ china stories 2
surfers who work ~ ambience in the workplace →
No comments yet