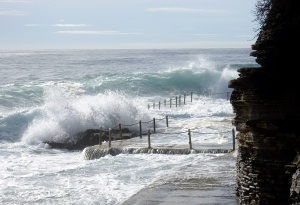 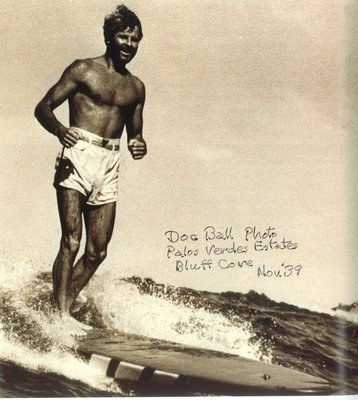 Tom Blake by Doc Ball – ‘Such broad shoulders these paddlers.’

Reuben left the office at about 12.30 in the afternoon.  Away collecting debts from local absconders who had purchased deck-gear from the firm and forgotten their consequent obligations. Many of them old friends of the firm, not a few from the local surf club.

Or so it seemed, because by fortunate coincidence the north-westerly had blown in at 1.00 pm as forecasted and had changed the sea changed instantly from addled corrugations to velvet corduroy. The deep groundswell that had arrived 24 hours ago now rounded on the coastline in a massively ordered approach.

The beaches and coves soon smoked up and Reuben counted only three cars behind the surfclub as he slid the Nissan under a pine. Oh happy days!

It so happened that …

Daphne and her daughter were down by the rockpool sitting on the raised concrete surround, and they too were admiring the precise commotion of the huge seas as they broke on the outer banks and then swept past them to the beach.

Daphne 63 and visiting from Leicester, her daughter Edith an Australian for twenty years.

Daphne widowed from dear Morris for fifteen years and in awe of the thunder and power of the sea under blue sky and warm wind. An attractive woman in the English way, her face already blushed from the sun.

Dark-haired, dark-eyed – Vivacious. She was letting the wash slide over her feet, her legs.

Reuben picked up the big board; the scarlet Indo stick Mick Mock let him have for a modest $1500 at his last Harbord auction.  The G-Land Express he had called it. First time out for Reuben, fresh wax combed deep, criss-crossed. He ran his hand down the thin rails, imagining speedy lines.

Daphne watched the surfer as he walked down the pathway toward her, a mature fellow carrying a gorgeously coloured board. His wetsuit was only half on. Such broad shoulders these paddlers. So different to dear Morris with his cricket and darts, bless him.

Reuben placed the board down and shrugged up the top half of his wetsuit over said shoulders, then bent to attach his leg-rope. So supple these surfers. So intense.

The wetsuit zipper strap didn’t survive Reuben’s sharp tug and it came away like a piece of cotton – so much for the Gooroo 2mm GBS Springy sample that R. Bain had tossed to him over the fence three years ago. Very neighbourly.

Daphne watched him coming over from the corner of her eye, walking right up towards her and Edith – So purposeful these watermen.

‘ I need a little help here if you wouldn’t mind.’

So Daphne looked right back at him, right into his sun-hardened face and into the strange distance of his eyes. That long look some men have.

Reuben smiled and squatted down, he turned his back to her and indicated the zip that needed closing. ‘ Could you do me up please.’

It was only after he had negotiated the leap off the rock apron outside of the pool and had disappeared into the white water lines did mother turn to daughter and whisper, ‘ I always wanted to do that.’