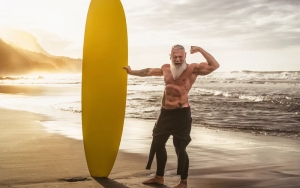 Remember that youthful body? Got any photos? Well, you should burn them because comes a time in your life it hurts to look at them and you want to know why?
Let me count the ways.

Muscles. What muscles? Where they were is now a droopy fold of crepe-like flesh and you have chicken legs and unsupported pectoralis muscles heading southwards down to where the abdominal keg used to be, just above the withered thighs. And you don’t wear T-shirts anymore because looking in a shop window you see breasts. It’s unmanly.

Varicose veins? Who doesn’t have them after a lifetime’s shutting down circulation by sitting on a surfboard in cold water for fifty years, and the ropey bastards hurt plenty as well as looking disgusting, not even boardshorts can hide the shame. Plus you should never bump them if you have them because the pain is immense and whimpering too is unmanly. Read the literature.

Circulation? Start with the purple non-feeling toes and work upwards, end at the fingers. Twenty digits there and none of them in working order. The only benefit is that picking nautical foreign matter out of a nostril is now mission impossible and you don’t look like a dag doing it. Learn to breathe out of your mouth for a change.

Eyes you say? Try macular degeneration, that’s when the eye doctors says for you to look up at a white ceiling and see that little whorl right in the centre of your vision? Later it goes black and gets bigger. Having that makes getting a cataract removed something you could do every day, that’s if you don’t mind walking around for a week looking like a Zorb wearing glasses with a giant-sized white plastic eyepatch over the job.

Outflow. And I’m not taking the piss but remember the Goethe sized stream you pumped out that could douse a campfire, well now it trickles into the pan in ever diminishing droplets and if anyone in the house slams a door that’s it, come back in half an hour. Get lucky then.

Emissions, voluntary or involuntary. Doesn’t matter, they can all leave their mark so it’s wise to double-up on underdacks or risk giving someone walking up the stairs close behind you a sight nobody wants to see. In other words, if you’re over 70 never wear white linen trousers.

Ears. Or being deaf in one until the local quack inserts a warm water sluice into it to dislodge whatever blocked it up this time, and if you think sex is good, well it has some opposition, I’m getting mine cleaned every three days but that’s only when Nurse Sweetly Caroline is on duty.

Teeth. ‘They have to go,’ he said, ‘all of them, top and bottom. They’re rotten. You might get an infection and die.’ What that means is you are in line for three pain-filled injections for every tooth he wants to yank out in order that you don’t feel any pain, until later, and when you leave the nurse gives you a handout and right at the top it says NO ALCOHOL FOR 36 HOURS. This you bin on the way out and pretend you never read it.

‘First we level off the toothless gums and a little remaining bone with an angle grinder so we can have a level surface to drive in the studs with a nail gun. That done we stitch up the wound for a month before you come back to have it unstitched so we can click in your new pegs. You do want to look like George Clooney, right?’

Wear a hat. Hide the loss.

From: Works
← Choice
no name – the little right nobody rode →
No comments yet