the strata committee and the surfer

Living in a block of apartments means a man has to comply with a complex set of rules and deal with the elected committee whose responsibilities it is to enforce them.

Committees whose members are staid and relatively humourless folks who take their job very seriously and when a sixty plus upstart from the coast moves in with his unwashed car and old surfboards, his cases of dark rum and boxes of surfing magazines and books, his down-at-heel friends and their atrocious music, and in particular their consumption of the local prawns by the kilo and consequent careless disposal of shells and heads via the floor’s garbage shute – the committee is prone to becoming a little testy and leave messages on the notice board placed by the internal garage exit.

No names or anything, but you know who they are meant for.

You, the new man. The grub who cares not a whisker for the stench of four day old prawn heads before the local garbo comes by and takes them away. And as a matter of fact it’s not unusual for the garbo to be numbered amongst the new man’s regular visitors.

Another problem for the committee is the water overflow when various exotic plants growing on the new tenant’s balcony need attention and  the excess water drains away and down onto the pathway directly in front of the lobby door.

This begets another notice.

Then there is the issue with the exotic smoke that issues from the same plant when wrapped in rice-paper, set alight and passed around said new tenant’s visitors to the background of a strangely composed music that is yet to become generally available in the town’s record shops. Not to mention the smoke that on a calm and balmy night infiltrates both the upper and lower floors through their open windows. No use wishing these folk sweet dreams.

So another notice, though indistinct in accurate detail.

However there are times when the notice board is free of such aspersions and the thumb tacks used to fix them in place are tidily grouped in a corner awaiting the next official warning.

Where sit there like multi-coloured wasps, ready to bite.

But somewhere in the building a resident joker, unknown to all, is prone to taking these tacks and redistributing them in random patterns on the notice board. Circles and squares, stars and triangles .. every day a new configuration and nobody the wiser as to who is responsible.

The temptation was too great, the joker had to be engaged and the only method available was to use the notice board. 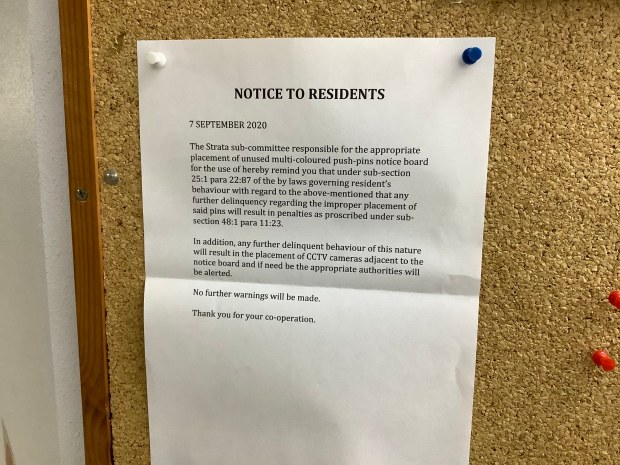 Let’s see how long it’ll be until someone rips it down.

From: Works
← party etiquette in the early sixties
byron bay, hollywood, batshit and bicycle seats →
No comments yet