a couple of bowral old boys

Our Lady of The Sacred Heart Bowral – Boarding School.

I was in here in the early fifties before two of us bolted out of a window in the toilet one night. I was about eight and heading for Sydney, my accomplice, name of Terry Triggs I think wanted to head west to his parent’s home. After about six hours we slipped into a horses’ stable on the road up to Mt Gib and tried to get warm under an old tarp that had been laying on the dirt for as many years as I was old. Two horses at the stable door looking down on us. Later, when it became too bitter to stay there we headed back to the school and were met at the top of the drive by Sister Philomena. Must have been about midnight and after a warm shower she bought us some toasted peanut butter sandwiches … how I loved that lady. Later my old man showed up with his brother and not long after that I was enrolled at Waverley College. That didn’t go so well either after I was introduced to surfing at Bondi where I bumped into this bloke again, he was a year or two in front of me at OLSH and a fair bit better surfer than I was.

Then he started playing tennis and I caught him up a little.

We’ve been friends for years now and he got me out of a few scrapes at Avalon. Owes me lunch. 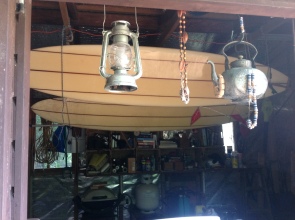 Both of them inside tickets to North Av at the time  … how sweet it was.