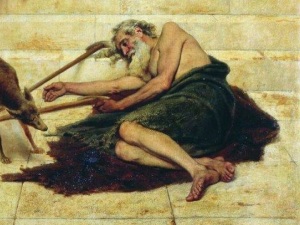 Matt has septicaemia – his lower legs are unearthly tanned, puffed up and bloodied with a seeping waste. He has survived weeks of untreated infection. He can hardly walk. So he sits day and night on the grass by the front fence of a bottom floor room of the hotel that overlooks the river.

Matt is an alcoholic, sitting there with his bottle, supping the long night through, judging his nips, unable to navigate the one block to the bottle-shop if he runs out.

Matt has forgotten how to deal with hunger, though it rages in his empty belly. This unending and painful need. He would eat scraps tonight if they were thrown to him.

Matt sits in his mess. His wretched seepage. His stink. And watches ordinary folks walk past his temporary station, some sparing him a hurried glance.

Matt loves heroin as much as he did his mother, sister and brother because heroin is all of them. A loving, warm and forgiving presence.

Jack Smythe lives on an old wooden ketch almost permanently moored in a small marina east of the hotel and his biggest problem lately is cleaning away the cormorant shit from his cabin top, They roost on the cross-trees you see, all day, that’s when they’re not cleaning up the silver bream schooling in the river, and Jack, who occasionally drops a line at the right tide, would prefer it if the birds left him one or two.

Jack looks after Matt, as much as he is able because the young bloke is almost beyond help. Like the other night when Jack was heading home to his dark cabin and mosquitoes with a take-away of boiled rice and sate chicken legs. Jack likes Thai, and he enjoys the ten minutes he spends with young Pensri while the kitchen cooks up his order.

Matt wasn’t conscious when Jack squatted by his side and gently shook his shoulder, waking him.

‘Hot tucker, mate,’ Jack said, laying his dinner by Matt’s side, ‘wake up and get stuck in.’

Matt woke like a man rising from the dead, and he looked up at Jack, bleary and unseeing, and when an understanding dawned the first words that came from his dried and blackened mouth was whether he could pay for it.

‘He even reached into his pocket,’ Jack told me later, ‘like he wanted to square everything up.’