a brush with the law 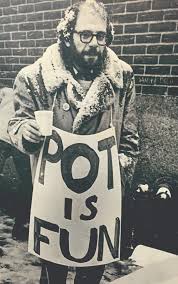 One of the reasons Kerouac, Ginsberg, Orlovsky and Burroughs liked Tangiers so much was that they could walk around the Grand Socco all day sharing a king-size joint before unpacking the typewriters.

That was in the fifties. That was when Pot was fun. Not so much these days.

Our man is a cautious fellow and he knows how the wind blows. He also knows that the smell of burning kief is instantly recognisable as an illegal and immoral pleasure to the inhabitants of this genteel riverside town … not only that, but nearly everybody in his neighbourhood has a close and dear relative who is employed by the state as one of the local constables.

So, on this day he packs up a number and drops it into the back pocket of a pair of boardshorts which he then wraps in a wetsuit and towel before jamming them all into a bucket in the boot of his car. Life is all risk these days.

He heads for the carpark at north wall. A favourite place. Wide open spaces. No surprises. But first a stroll out on the wall to see how the waves look. Who knows, a man could get lucky.

There is a policeman near his car when our man returns and he looks to be comforting a young woman. She appears distraught and is waving her arms about, explaining something. Our man instantly changes his plans, gets into his car and quietly rolls away, noticing in his rear-view that the comforting cop has now moved into the middle of the road and is pointing at him.

Not only that, he sees a police car a hundred yards down the road and another cop is standing next to it and watching at what his colleague is pointing at.

The guy with loaded board shorts.

I cruise on by, breathing deeply, turn a corner and head for the hotel room. Pot isn’t going to be fun today.

We all know what it feels like when one of these hornets looms up in the rear view with everything flashing – so many things could be wrong. Licence, rego or insurance out of date. Bald tyres, noisy exhaust, rego plate missing, brake lights not working, seat belt not fastened, going too fast or going too slow. Been drinking, sir? Been smoking illegal substances, sir? Been chewing down on some substances bought without a prescription, sir?

These blokes have a Smörgåsbord of illegalities to choose from.

We all stop, They get out nice and easy, lights still flashing and everybody in the street is now at their front window watching. I get out. Walk around to the back of the car and pop the boot. Reach in.

That got their urgent attention but all I wanted to do was grab a pair of thongs because talking to two cops barefoot isn’t a good start. They probably thought I was going for the shotgun.

They wanted to know who I was, where I’d been, how long was I there and what was I doing. Then one of them asked for my licence before walking back to his patrol car and getting in. The other cop asked if I’d been swimming. Asked if he could have a look at my towel, took it out of the bucket with the wetsuit and saw the board shorts hulking there.

Situations like this you get asked plenty of questions.

Mind if I have a look at these, mate? sez he, picking them up.

When everything was settled they explained that the young lady in scene 1 had been monstered by an old perv who had loomed out the water before dropping his daks to show off something wet and ugly enough to frighten a big brown dog.

That was about that. Then one of them asked me what I did. Got a few blogs, says I, and this event should be good enough for a laugh.

Cop 1 looked at cop 2 then looked back at me with a tight little smile.

Then they stood and watched as I drove away.

From: Ballina
← yin and yang
lazarus →
No comments yet