Uki, Nimbin, Billinudgel, Mullumbimby, Tintenbar, Newrybar, Tumulgum, Murwillumba, Coraki, Coorabell …. you have to live up here to know the language. That being these are places where everyday commerce, in a manner of speaking, has to take place in great secrecy. So you have to be watchful.

Local legend has it that the plan devised by Nednoname in the early fifties was based on an event that took place in Adelaide in the late forties. Ned’s a reader, bookshelves in every room they say, and no TV. No wife either, just four border-collies and that should be enough for any man.

This is how it runs:

Nigel is planning to share the joy over the coming summer months, he’s a surfer, he has lots of surfing mates. The other thing you should know about this corner of the earth is that the waves, when on, attract surfers by the thousand.

Nige’s mate, Tex, knows Ned’s routine so when Nige arrives in town on the right day he knows the plan. Tex is good value. Top mate. That info cost Nige $500 and Tex sent half of it to Ned to get the ball rolling.

Part of the plan is that Nige bring a small piece of the local newspaper with him when he comes to town, the one he received in the mail. Part of page seven. That one.

Ned does his business with sanctity and forbearance, he’s a cattle farmer and could seek out a lurking copper with the same precision as a kookaburra does a snake in a stump.

Ned’s in the park, sitting on a bench, waiting. The time is right. There are four other benches in the park, two occupied. Only Ned has an open newspaper beside him, spread out, like he’s just put it aside for a moment, plus it stops anyone sitting there. Ned is no mug, just looks like one.

Nige, who has just had an outstanding session at Broken Head rolls in looking untidy. Sunburnt, hair long and ragged, T-shirt holed here and there, faded boardshorts, barefoot, square shouldered, clear-eyed. This is what some of us look like up here  … mirrors do not lie. 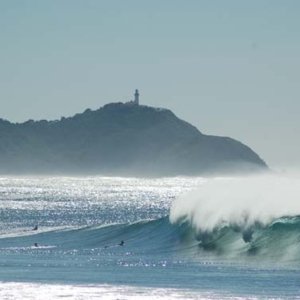 Nige strolls past all the benches then sits beside Ned, dives a hand into his wax pocket, pulls out a slip of newspaper and fits it into the hole in page seven.

Too easy. So after a few beers in the local pub, maybe a pasty for lunch, business is done and everybody goes home happy.

Anyway, that’s what I was told.

From: Works
← how to kill a brown snake
Tom’s FX →
No comments yet