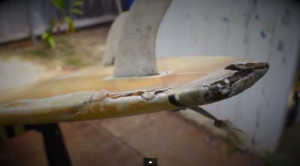 Number 1 – a nine foot, double ended bleached balsa stringerless by Gordon Woods. Waxed it up with paraffin bought from the chemist which fractured the deck everybloodywhere. Thirty quid, delivered from Brookvale to Dover Heights. That’s the day my father first met a surfer and the year I started getting into everyone’s way at South Bondi. The Napro Days.

Number 2 – a nine foot six square tailed balsa with two stringers by Ray Young. Built in the old stable off Bondi Road. He couldn’t finish it in time for me to take up the Gold Coast so he flew me up one of his own. Spoke to him a couple of years ago. Lives in Brunswick Heads. God bless him.

Number 4 – an eight foot six square tailed stringerless foam built by Scott Dillon. The rule was never to visit Scotty when he was on your job, the bastard could talk for hours and there’s your board not ready now for another week.

Number 5 – a nine foot, round tailed single stringer double-ender by Gordon Woods. I was coming up the last step to the road at Warriewood one fine big day, past a couple of loafers. One of them scoffed at the GW sticker so I swung the board around hard and jammed the tip of the single fin into his ear.*

Number 6 – a stumpy little orange lightweight foam borrowed for a trip up the coast from a friend and never given back. Brent, did I ever say thanks?

Bluey Mayes said please for the first time in his life when he asked me for a wave on it. We were at Crescent: 6′ all the way through to the rivermouth and the bastard stayed out there for three hours.

Number 7 – a nine foot Lawrie Hohensee nose rider bought off the rack to use at the Pass, it went so well somebody stole that too and we had a goat die under Algae Reid’s car the same day.

Number 8 – a nine foot six multi-stringered square tailed Californian masterpiece by Hobie, built for Corky Carroll, just like the one Phil Edwards brought to Australia for Bruce Browne’s movie. This I know, he left it on our lawn at Byron for a day so we could kick it around.

CorkyC sold 8 to me, promised me everything. Took it for a month down in Baja where a few unfortunate incidents happened with some Californian lads. It’s probably still under the same house in Vancouver where I left it fifty-five years ago. Someone tell Corky.

Number 9 – a wide and light eight foot six square tail by Gordon Woods. I had it under one arm when I vaulted over the wire fence at Dee Why one morning, in a hurry, as usual. The wire gave and the right-side cheek of my rubber covered backside impaled itself on the sharp end of a metal picket.

But that was ok, Mona Vale Hospital had pretty nurses on shift that morning, trouble was all they were interested in was how deep did it go?

Number 10 – a nine foot square tailed parallel railed unrideable beast by Midget Farrelly. Imagine a very fast 6′ North Narrabeen surf club right folding over a bloke, as per plan, and someone paddling out right in the way. He was worried, I was worried, but the board wanted to kill him. Thanks Bernie. Remembered.

Number 11 – one of Simon Anderson’s Thrusters. No more need be said. It lived in the best room of the house and was widely respected. One day when I wasn’t using a leg rope at Mona Vale it surprised Nat Young when it shot out of the foam at him. He was very rude to me. But later he paid.

Number 12 – another of Simon’s. Even better. Built at Mona Vale in the house beside the Fire station. A timely introduction to the hamlet of Avalon and its welcoming committee. But, as you all know, when in doubt of those who surround you, go deeper.

Roy was easy. I have the pics.

Number 13 – This one was built by Nat Young, must have been, his name was on the label. The board was long narrow and flat, like Nat, unreasonable when a request for change of direction was required, also like Nat. What used to beat me about that bloke was why he needed duckboards behind the counter of his shop. Fucker just loomed over you.

Number 14 – an eight foot light weight round-nosed flyer: ask Russell Hill, he’s still got it. We were the early trio then, him me and Age. This board made a bloke look so good even Alex McTaggart wanted a go one fine Saturday at North Avalon. He didn’t get it.

Number 15 – an eight foot six triple stringer classic by Mick Dooley. I had to tell it to him gently. Mick, I said, it’s got too much rocker. So there was only one thing to do.

How North Avalon feared me.

Only a surfer knows the feeling.

Pic is of an Usher by an Usher

*that may not have happened.