Midday: still no waves, it’s so bad that there is a wave-ski out at LA and he’s catching everything. Wouldn’t surprise me if he’s onto his mobile later and tomorrow the whole crew will check it out. Now that might stir up a little emotion at the fire-station.

I heard that Avalon is going to be remained ‘The Aquarium” (all the fish out there) How is it that all these mid-thirty blokes are buying Fish these days? Their last gasp? What’s the matter with standing upright.

Only a slight rise in swell but the weather map is beginning to look very weird with 2 lows offshore of NSW. Some of the wind gusts are pretty strong as well. Very few around despite the fact that the water isn’t too disturbed in the corners.

Think I’ll drive up to Palm, try the corner, take a pic, grab a sausage roll, maybe have a swim – then back to Av for a coffee and a bagel, or maybe a croissant. who knows, maybe I’ll go see Ian the surf club caretaker, have a few beers, tell a few lies.

Response from Adam Knight: “you have the life.”

Not much happening other than the water is pretty nice and a chili taco with a pint of Oak vanilla in the shade of the surf club is about as 5 star as a bloke would want. I was talking to my mate Nightlight earlier (he’s a bit dim) and he reckons tomorrow won’t be so hot.

Palm Beach right now is where you should be  if you want any sort of wave. It’s a sloppy low-tide two foot but at least they are breaking. Only about a dozen out in windless conditions and roving pillars of heavy rain, a very tropical day.

Where’s all the young blokes? A fella gets down to the beach this morning, nice and early, checks it out as pretty good with a glassy 1 metre plus breaking way out there, sez g’day to a couple of mates all in a hurry to get out there as quick as they can, old blokes these blokes, about 40 plus.

Paddles out past another couple of mates who are sitting half-way out on the mid-sized rights, almost old blokes this lot, about 30 plus, well past it. Finally gets out the back amongst the glassy humps and here is where all the granddads are, about 50 plus. No young blokes! Whassamatta with ’em?

When you’re a kid you’re supposed to be out there for an early, right?

So wake up to yourselves.

Response from Russell Hill: you’re f88king crack me up.

There is no surf. There will be no surf tomorrow, or the day after. As a matter of fact I have it on good advice that there will never, ever, be surf again. This catastrophe may be connected to the plans of News Ltd to buy the coast, fence it off and install wave-makers at every known location.

Their vision, I’m reliably told, is to collect from ever surfer at the entrance, again at the carpark, again at the board hire, again at the wave-pool, and again at the food outlets. Price per wave will be determined by wave height, speed and length of ride. All equipment will be available at the site, personal boards and clothing will not be permitted because of safety and insurance restrictions.

You’re sitting there thinking that you may be missing something, you’re stuck in an air-conditioned box hundreds of feet above the street, itchy with it, thinking that the stiffening nor-easter might be pushing something into the corners, low tide about anytime, wind turning offshore in spots … beaches pretty empty, thursday – all the doctors sailing on the harbour the bastards.

You’re not concentrating at all now. Well, forget it, there’s nothing nowhere, so get back into it.

Well, it’s offshore at Clareville. The high that is providing the easterly looks like it will stay in place for about 6 months and if that means I gotta start drinking rum in daytime then this space might get interesting.

Response from ‘Compo’ Brownlow: thanks for cheering me up. 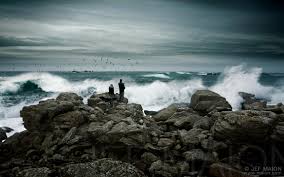 Tags: adam knight, around the bends, compo, jef maion, ken brownlow, larry from realsurf, realsurf, Rob Bain
From: Avalon, Food, Surf Reports - back in time, Works
← a dip into the past
babe of the day →
One Comment Post a comment