tara moss – a warning to birmingham 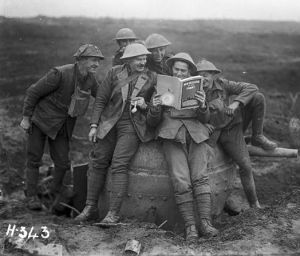 The man sitting in front of me at the Ballina RSL is reading a book. Next to him is another bloke reading from his iPad.

The iPad guy is a slob; thongs, Tshirt full of grub marks and shorts that walk on their own; the book guy has a dome where his hair was and his glasses have a red strap, wide red strap, like something you’d wear skiing in Sochi to keep your glasses on. He’s also wearing shorts with sandals.

I like the book guy, he’s almost at the end of it and the cricket’s not on for half an hour so when was the last time you ever watched a man reading a book?

This is pertinent because right now I’m writing one, and right now I’ve got to get a Russian to try to kill an Australian in the sampan quays in Hong Kong in 1948. This is a word by word build because if I’m going to read this stuff when its finished it’s going to have be on the fucking money. I like authors with all their shit together. Tom Cruise will not be in this movie.

If you ever hear a writer say he doesn’t read what he writes he’s bullshitting you. Who cooks and doesn’t eat, who rolls a number and doesn’t smoke some, who paints a picture and hangs it up face to the wall.

If you ever hear a writer say he doesn’t read what he writes it’s because it’s not good enough, and he ought to know.

Meanwhile Dome is wading through his book here, I can see by the inclination of his head what page he’s reading, left or right – and it’s zip and flick for about five pages.  Four hundred words a page, that’s two thousand words gone by full throttle.

My Russian guy is now softly creeping up behind the Australian who’s having a smoke on the edge of the jetty and gazing out on the harbour.

The bolshie has a knife. It glitters.

This has taken an afternoon to do so far. What if the speed reading dome was reading my book, I might as well write a cheeseburger menu. But now he’s stopped and is taking a bit more time per page, and he’s moving his foot up and down, there’s a little twitch in his neck. A couple more slow pages and then he’s back on overdrive. Read a bit / flick / read a bit / flick.

Just a couple of pages to go.

He hears the rustle of clothes behind him and turns …..

The Australian isn’t Chuck Norris, this is 1948 and roundhouse kicks weren’t practiced outside of  mainland China. So he’s got to do something and get out of it without a mark, both of them, because they have to come back later on in that part of the book that hasn’t been invented yet … this is how it goes, s.l.o.w.

Dome’s finished, two hundred pages in twenty minutes and now he’s browsing the thanksalot messages on the back flyleaf. This is a $33 sized paperback about 500 pages big and all I want to know is who wrote it.

Because this guy has just proved that a lot of the writer’s words in there were wasted on him, when he got up to go away I thought he might dump it on the table. He didn’t, but I saw the cover as he walked away.

as a note: Ms. Moss took offence at the ‘crimp’ comment to such a degree that she let loose her particular hounds from hell (Facebook) in a combined exercise to exert either an apology, or a retraction of the whole thing. This was resisted with great vigour, as a result her FB babies became so vociferous we had to draw her lawyer’s attention to the enforceable nature of the rules that govern both defamation and cyber stalking.

She retreated to her lipstick, FB selfies and atrocious ego.

All in all, a first class stir. Medals all round.