the cold eye of a father 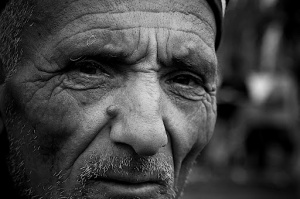 He looked at me, with his hard old eye, the one that forever cut through my explanations of this and that – whatever it was that I had mis-timed, or mis-judged through a youthful lifetime of wilful disobedience.

The cold eye of a father who knows his son, and wants him to learn.

He looked at me as I sat by his bed in the room that he now rented, by the month, and he asked me how long was it that I was going to keep him here.

That cold clear eye, in that old brave face.

Until I can do better, I said, until I can find a place that looks over the sea, where you can sit and watch the wind change on the ocean’s surface.

A headland somewhere. North or south, a place open to all the the winds off the sea.

And looking to the north, I said, so the winter sun has some warmth for you,

sitting against the garden wall, watching your great grandchildren come and go from the beach,

Such laughter. The sea is a joy.

That’s when he smiled, and reached from his bed and took my arm and held it, soft.

His strong arm so withered.

He would never see his home again.

Bullshit he said, but you do what’s best.

Six months later, we buried him.