longboarders, their positive side 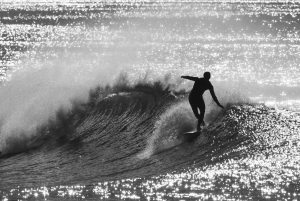 Long-boarders are misunderstood, this is an undeniable  fact and it has led to immeasurable suffering. No wonder they feel like pariahs in the water, overweight and out of date, slow and ponderous with only a vestige of their old skills and little ability to enable them to compete with the youth, who despise them.

Some long-boarders go to desperate lengths in order to compete for waves but the inescapable fact is that the more years a man surfs the longer his board must be made.  On the one hand we have the twelve year-old surfer riding the back half of a broken piece of cast-off foam he found in the gutter, and on the other we have a white-bearded granddad of about 67 lugging his 9’10” $2,500 wave-monster across the Barrenjoey Road, against traffic –

How a man can do this in full public view is a matter of great shame to those who take the game seriously, it is bad enough to ride a log – advertising the matter is not a good look. Bloody shambles in fact. Somebody should slap a fine on these dodgy old relics and consign them to the bowling club greens, either that or re-introduce them to marijuana – a little physically introduced paranoia in the surf can go a long way.

Detailed mathematical research conducted by the Ponds Institute has shown that for every five years a surfer remains active over the age of 35 his board size usually increased by 5 inches.

45 – 8′ ….. and so on. It’s an interminable progression that can only end when someone defies mortality and is pushed onto a wave in their coffin .. although this has probably already been done by the Americans. There are a lot of dead men surfing over there, we’ve read the magazines – seen the pictures.

The downside for those codgers who insist upon riding a younger man’s board size is that they inevitably assume the stance of a chimpanzee when they finally struggle to their feet, which is usually far too late and directly in front of someone a quarter their age. The resulting carnage can be excellent excellent viewing, particularly when the youth involved in the collision has a good head of steam and a bright vocabulary. We are optimistic for the future of the sport.

The long-boarder though has brought a certain fastidious manner to the beach, a carefulness that is not only pleasing to the eye but is ecologically sound. Where the callow youth consumes large Subway loaves and scatters food wrappings and unwanted morsals all about his person, the long-boarder brings a small sand hand-rake, a disposable rubbish container, crushable plastic drink bottles and obedient children – and he leaves no mark of his passing.

What is worrying though is that many of these fellows have been years wedded to bottle-blonde wives whose personal habits and choice of beachwear are at odds. These ladies remember the straw headed youth who took them away up the coast not long after the second world war, they remember him as they gaze at the old man with a sagging arse and a watermelon in his stomach trying to fight his way through the shore-break and all the yelling kids.

Tags: longboarders, longboards, the ponds institute
From: Works
← the mathematics of surfing – (1) the 5 definitions.
surfing. the sacred hours and how a happy marriage eliminates them →
4 Comments Post a comment