bhazow, the expat in hong kong – the job applicants (part 1 of 2) 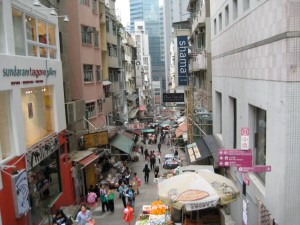 Bhazow was seconded to Hong Kong in 1966 and he remains there until this day. His fortunes have been mixed and no two days have ever been the same. This is the way with the Orient.

Today we follow him through several job interviews, today we become part of his world.

Bhazow halted at the entrance to number 4 – 6 On Lan Street in the Central District Hong Kong, the pink building, and exchanged glares with an ancient crone who was sat by a charcoal brazier broiling Dim Sims in the lobby. The woman’s companion, an equally scabrous and unwelcoming female cackled softly and muttered something obscene in Hokkainese, which, to Bhazow’s mute and immature comprehension sounded like the names of all the English Public Schools north of Ealing.

A small tightly wrapped and basketed child slept soundly by her bare and blackened feet.

Fortunately Bhazow had been forewarned by Kasamir, the archly sinister Macaun doorman of his Mong Kok lodgings, and after offering both women the opportunity to pillage his packet of Marlboro Fine Filters he was allowed to progress to the third floor and to the office he intended to use for the interviews.

The task was to staff a new accounting branch in Hong Kong and he had scheduled five applicants for interviews today, and although a little disappointed with the standard of the premises thus far he nevertheless managed to maintain his stolid yet optimistic outlook that all would eventually turn out well, and he slowly climbed the fetid stairways. Slippery rises, gloomy stairwells, he ploughed upward into the darkness.

– notwithstanding a moment of panic when confronted by what might have been a naked woman on the second floor, a sulphurous being who croaked at him inappropriately from a narrow rent in her/his/its massively buckled metal door.

Bhazow entered the room at the precise moment the phone rang, a Mr. Jorges McIvor on the line, who confirmed succinctly of his appointment at 9.30 am  before promptly disengaging the call…. (?)

An appointment not scheduled for today. A Mr. J. McIvor not known.

Bhazow pondered that puzzling development as he took stock of the assets; one bare room tidily furnished with a drawerless desk, two plastic chairs, one bakelite phone and one overhead globe. The only uncurtained window looked over the narrow street and directly into another window, equally uncurtained. A littered table centrally positioned there surmounted with a bottle of Gilbey’s Gin, unused,  and one sock, woollen.

A Mr. J. McIvor rang to confirm his 10.00 am appointment – whereupon he disengaged himself of the connection without any further explanation, again.

When Mr. Easterwood closed the door as he left at 9.45 am Bhazow was at the window disconsolately watching the pyjama clad occupant of the office across the street putting on his shoes and drinking his Gilbeys, from the bottle.

Mr. Easterwood’s interview had begun badly when he fired up a very large pipe containing a dark mixture of Irish Plumrose Roughcut and what must have been a generous pinch of Nepalese black hashish. The gentleman had declined to utter a word during his short stay at Room 41/c and appeared to develop a severe itch on his right instep which he had attempted to relieve by lacerating what was until then a pair of  attractive wingtip brogues with a small steak knife he appeared to carry about for precisely that purpose. He left limping and unfullfilled.

At the precise time Ms. Chan softly knocked on the door of room 41c the telephone rang again and in clipped intonations Mr. Jorges McGivor informed Bhazow that he may be a little early for his appointment at 11.30 am. Then, despite Bhazows’ exhortations to remain on the line, Mr. McGivor smartly disengaged himself of the connection.

Ms. Chan, a demure middle-aged woman who was perspiring mightily beneath her thickly wove plaid suit, sat solemnly as Bhazow gave a brief rundown of both the company and the job on offer.

However, as he was explaining the reasons why the company was unable to offer any more than the market remuneration, Bhazow was disconcerted to observe that not only was Ms. Chen staring fixedly over his shoulder but she had paled considerably and appeared to be on the verge of a dizzy spell.

He quickly rose and after ascertaining that the good woman was in no danger of falling to the floor he turned to the window behind him.

There, the gentleman who had previously been occupied in slaking his early morning thirst was now apparently readying himself for a day’s labour – and was in the midst of selecting his wardrobe from a suitbag hanging off a nail in the wall of his office.

Ms. Chan’s problem arose from the fact that the said gentleman had earlier and immodestly divested himself of his pyjama bottoms prior to choosing his streetwear. He also appeared to be suffering from some irritating discomfiture about his nethermost regions, one that indeed required the constant attention of his right hand, whilst the left remained firmly wedded to the Gilbey’s bottle.

Ms. Chen left without excusing herself.

Bhazow welcomed Mr. McMartin-Browne and then excused himself as he temporarily left the office in search of a bathroom. This normally uncomplicated exercise was made all the more difficult by the fact that every other door on every other floor – barring the previously mentioned sundered metal barrier on the second floor – was nailed shut.

Fortunately he was able to make his needs relatively clear to a ragged little stall-holder selling oranges only one city block distant from the office building. This gentleman then directed the increasingly agitated Bhazow to a grim concrete structure almost hidden by the twists and blind endings of the streets of the Old Quarter.

Wherefrom he shortly exited; his grey head reeling from the pungent stench of ammoniated oxygen that had been heavily redolent throughout the structure, and his eyes watering from the sight of what could have been many months accumulation of defecated matter.

Bhazow paused for a moment before retracing his path to the office and he considered using one of his remaining Marlboros as a means of clearing his head of the fumes and visions that he knew would stay with him for the rest of his days.

Back at the office and of Mr. Rolly McMartin-Browne there was no sign.

– to be concluded unsatisfactorily in a day or two