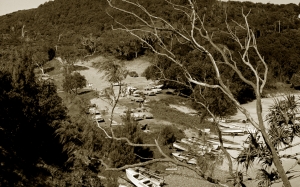 The old slaughter floor, stripped out and re-decorated

Noah was a Bumberin grandfather whose family used to man the Byron Bay windlasses that once dragged ashore the families of harpooned whales whose offspring we now fawn over as they paddle past Sydney on their path to the Hervey Bay tourist boats.

Noah ended up late in life favoured with a job at the Walkers slaughterhouse that had him stuffing offal, waste, and all manner of dead matter dragged off the slaughter floor and into the super-heated steam boilers that produced both tallow for the Norco butter-makers and meat-meal for the agriculturists. The cooking shed

The old man though had his eyes on that time_come_later, and the youth from Bondi had his job in an instant when Noah decided to stay sat back in the tea-trees behind Seven-Mile for a month or two to deal with his dreaming time.

The youth, we’ll call him Scoresby, found early on in the job that his first problem was the attitude of the local toughs who laboured in the killing yards and who hated surfers both local and visiting with great enthusiasm. Surfers from Brisbane were roundly disliked and those from Sydney were utterly despised. Their ritual slaughter is better documented here

Scoresby’s second problem was dealing with this bellowing and squealing industry of death as lambs, pigs and beef cattle were dealt out of life between the 6.30am and the 3.30 pm whistles sharp. Blood everywhere and everyone worked with knives and bolt-guns and the two loudest sounds that issued from the concrete rooms were the screams of beasts and the droll laughter of men.

1964 and the north coast was a Paradise, or so said Bob Evans in Australia’s best read Surf magazine at the time.

1964 and a semi-trailer dumped eleven Jersey milkers onto the forecourt of the abattoir, all broken up and dying after being hit on the highway crossing by the Lismore-Ballina express.

The few pregnant cows had had their bellies slit and their unborn calves (slinks) removed and  tossed separately onto trolleys that were eventually tracked up onto Scoresby’s mezzanine above the super steam-heated cook-pots. How he worked and waded about in that place knee deep in animal parts and gore, waving away the squadrons of blowflies; buffeted by waves of stinking hot air he proudly worked the job no other man in town would take. Such was the value of a Sydney Private School education.

Now back in 1964 Byron was having a serious crowd problem with visiting surfers from other parts of this great nation girt by sea.

Dozens of surfers camped in Palm Valley and few of  them paying any rent to poor little Jim Limberey VC the park caretaker, who ranted his catechism of plaints to them as their rocks thudded onto the tin roof of his modest shack by the carpark. Nobody noticed his careful gardens and lush tomato crop, and the little man battled us all day by day and we revelled in his discomposure and temperate rages – we circled him like wild dogs, we pressed him into his corner and ate away at his modest life and place until he was gone.

Scoresby though, and to the enduring admiration of all the local families like the Keevers and the Reids and the Stomper-Pengallys, dealt the problem a solution that could not ever be imitated in these kindly days of social liability and communal correctness.

Herewith the Scoresby Method of dismissing the unwanted.

Rip an unborn calf from the womb of its dead mother and let it stew a while in the summer heat, then transport it at the dead of night to the Pass campsite wherein sleeps The Tribes of Unwanted and deposit this decomposed matter within their midst. Silently steal away, stifling all laughter.

Then return very early next day to see the rabble scatter in panic and shrieking like girls, unknowing if this rotted flesh in their midst is the remains of an animal (ie: a horribly mutilated Sydney boardrider) or some other unspeakable thing (ie: a dead goat)

Or in other words, young Scoresby would pinch a few slink carcasses from the plant, let them cook in the sun for a while then bag them up for transport and later that night he and his offsiders would toss them amongst the tourists’ tents in the hope that they would get the message in the morning when the stink awoke them, and then they would hopefully piss orf to Queensland and leave the Pass to the locals and their lucksome initiates.

Feature pic by John Pennings – courtesy of   A Liquid Life