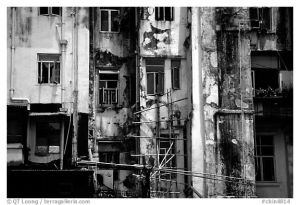 The corner seat in the public bar of the hotel on a Sunday morning.

The seats are sticky and unclean, this is usual.

The air is redolent of stale tobacco and old alcohol stink, the floor and walls are mudded up with some kind of atmospheric grunge and are unwashed for weeks. This is a rude place, a tired hostelry where every door is a drunkard’s exit.

Eleven screens flicker their melancholy list of local Totes and about a dozen NZ Harness Races; NSW country greyhound previews, NSW provincial horse races, cartoons and interviews with men whose harshlit lives are an eternity of distance away from the clean easterly swell that caresses the Sydney coast this morning. They natter away their commentary. Nobody listens.

The barman on duty has been here all night, his black T-shirt and black trousers shine with the grease exuded from his body and the congealed fat of the snack bar fumes. He walks around his tasks tiredly, pale faced, the bruised eyes.

There are 8 trays of unwashed glasses heaped on the floor by the glass washer and a glimpse of shell-backed scuttlings flick away beneath his slow heel as he wanders here and there, beaten down by his unwholesome labour.

Two drunken men are at the bar arguing about football. Unshaven men, twelve hours into their marathon.

Outside the corner window the newsreel of life progresses and over the road a ragged and bearded old man lays down to rest on the footpath behind an illegally parked white Nissan 200XLS.

Then this fellow here, walking on by.

Dressed by an unchosen ghost whose mirror likens his match of bell-bottomed white slacks with oven-cured red kinked hair and a pink silk shirt. He almost flutters in the early morning city stink.

His boots are snake skinned and Cuban heeled, and he steps lightly from the road to the path.

But he gimps on the street gutter-top and nearly falls over. The spill of a two dollar casino chip has him grasping about the road raw handed.

This old man in funny clothes, all done gambling forever two hours ago – fed now, washed, and luck’s lucky nephew once again, he stares blankly at the city walls.

Three times he drifts past the corner window, and every time from a different direction.

Maybe Italian, Sicilian. Swarthy and with a singular and unimaginable purpose. A Sydney Soprano.

His tightly oiled black hair is pony-tailed up over the back of a muscle T-shirt and he has the preoccupation of a sombre man planning something other than killing time.

He came in to the room and sat behind us. No drink. Just smoking. Looking over our shoulders.

The driver of the Nissan 200 unlocked his car and slipped into his seat.

A zealot in rags haranguing the street. Blasting out John the Baptist, the gentle Jeremiah. He screeches. He has many brothers in this Godless city.

Christ’s man in his fury at the Temple of hypocrites. He usually shrieks his Benediction to the city’s canyons of darkness and nightdark winds.

The two drunks finally embraced and the Nissan silently backed over the skull of Mr Steven McCaskey, killing him instantly and leaving three grandchildren and an abused daughter without a word or sign of his now eternal wait on a harsh judgement. His questing fingers stilled at last. Puddled in his black blood.

Francis Metier, man as woman and dressed in gilded tulle and fine lace glided through the bloodied sidewalk and without any notion of consciousness looked up into the dark-glassed corner window and at me, knowing her voyeur.