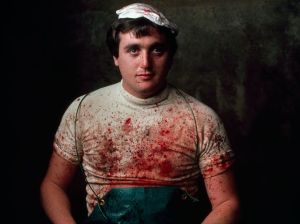 The uncovered shute rose two stories high from a large yard in the front of the building, built narrow enough for just one beast to fit and steep enough to keep the line of them unbalanced; built of sheet steel it solidly defied all their attempts to kick the sides down and their daylong procession up this final walkway and towards the boltgun chamber provided a thunderous percussion to the everyday’s chorus of misery.

The topmost beast was hot prodded onto a level platform at the head of the shute and enclosed there by sliding a guillotine trap the slaughterman lowered behind him. Les Heath worked there alone for each of the ten-hour shifts, and in his fastidious way he executed up to two hundred and fifty beasts each day before he made his way back to the small cottage he leased behind the southern corner of Broken Head.

Les was a small man cruelly fashioned with a Kyphosis hump and a lifelong aversion to direct sunlight, men who had worked with him for over thirty years had never seen him without his hat. He was a silent man with deep religious convictions and an abiding patience for the three lads perched behind him on the outer wall eating their lunch. Chattermouth kids leaning over to watch him place the muzzle of the bolt gun against the head of the trapped beast.

How they died these placid beasts as the gun was settled on them, and at times their eyes rolled upwards to their executioner at the instant he released the bolt, in some kind of dumb fashion of trust, and in that trusting instant the retractable bolt smashed through their skull.

Jimmy and John, the Islander brothers, and Pete, no longer the newboy; sitting up there like magpies on a fenceline watching car accidents.

There were times when one of Les’s poll knockers failed to kill a hard-headed beast immediately, and when he released the trap that dropped the semi-conscious animal onto the blood-floor it would stagger upright and scatter all the black aproned butchers to the walls until one of them managed to seize the sledgehammer and deliver it the blow hard enough to knock it back down. Then he immediately bent over the animal, drew its head back and sliced open its throat, and then stood by in the hot slick of blood, hammer ready, until death was certain.

This was the terminal encore for the three lads up in the stalls, on their feet now and lunches forgotten, crowding Les out of his stall, whistling and catcalling advice to the actors down there on the stage, hoping for yet another bloody uprising and charge from the catastrophically maimed beast, wanting, without knowing, a rich spill of men’s blood here to balance out a scale of bloodletting that had ever been in their favour.

Watching the six butchers blunder about on the wet floor in panic and in particular the one known to have always had the other mens’ wives on his playlist.

And his troubled eyes were for his colleagues in this instant of real theatre, not the staggering beast as it bumped and bled and finally submitted to the crushing blow of a twenty-pound sledgehammer.

And he heard the mocking catcalls from the shute-top that betrayed the whole town’s knowledge of his indiscriminate fucking, and in the midst of the improvised slaughter of the undead beast his upswept glance took all of us in, and his ledgers were unjustly posted as being owed, and in the years to come many of these dues were collected.

2 am and the backdoor bangs open as the drunk careens into his darkened kitchen and pulls up hard against the table there and in the moment of quiet before he aims his truculent body towards the hallway and bedroom he hears a scurry of movement up there and the soft scrawl of a window being raised.

He is handy with a knife, but his rush up the blackened hallway is hindered by his drunkenness and when finally he stands in the doorway of the bedroom she is lying quiet there and cool air pours through a window rarely open so wide.

“ Three weeks later Les fails to knock a hardhead over and the cow gets upright on the bloodfloor after he dropped the trap and it needs another killing, all the butchers duck away from their beef to the walls until its over and I’m watching Mick the Pom to see where he’s looking. Someone else grabs the hammer for a change and if Mick backs into me in this fuckup he’s going to wear my knife in his kidney at last.

He’s looking everywhere but at me, the cunt, he must be fucking everybody’s wife to be so fucking wary, and now he’s looking at the bloody kids up there with their racket and pisstaking, trust those little black arseholes to know sharkbait when they see it. “