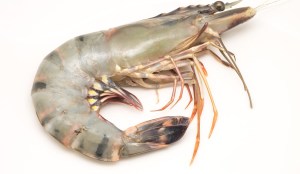 A quarter of a kilo of raw tiger prawns from the local co-op and some lemon rind, a good pinch of chilli flakes, lemon juice and parsley, some butter and oil in a pan and before you know it a man’s got the makings of a tasty pasta  .. except he forgot and bought cooked prawns which won’t work so back we go and in we go and here’s this little bloke about four running about the wet floor making a racket and wanting someone to unhook the shark jaws from the wall so he can have a better look at them.

Cedric. So his father says. He’s outside reorganising the load in his his boot, not a big fella either, short dark and wiry. Not a lot of teeth. Plenty of curly hair.

‘That your young bloke in there?’ asks I, coming out with load number two, being the raw prawns, feeling friendly.

The young fellow name’s Cedric, he says, named after his grandfather he says, and being from the Bundjalung mob that’s what we do he says, keeps the line going.

Seems Cedric is bound to grow to about seven foot says his dad, like his twenty-five year old brother, but until then he squirts around the place here and at home in an unending frenzy of excitement and wonder his dad says, lighting up with a big smile. What father doesn’t do that when’s talking about his youngest son.

I’m in the carpark talking to his dad about all this and I can hear the little bloke inside the co-op making enough racket to scare the mud crabs out of their grim aquariums. His mum is in there somewhere as well, dealing with the big white boys in their black fish-cleaning aprons. It’s late, they’re cleaning up, but they deal with her kindly.

That was about it.

See you mate, says i.

Look after yourself sez he.

Dinner got cooked and eaten and now here we are.

From: Works
← beach grit
the concrete jungle →
No comments yet