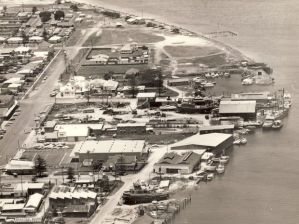 Eight in the queue, two in front, five behind. Sitting in a chair to the side where the enquiry cubicles stand empty, a thin woman, emaciated, wearing a tracksuit and sandals. There’s no telling her age. She’s talking to a woman in the queue.

The woman in the queue looks over and nods.

She has a soft voice, her inflections resigned to loss.

The woman in the queue is called over by one of the tellers. She leans in and speaks to him, he goes to his key-pad, listening, flicking through the screens.

A banker comes out of his office down the hall with a couple of tissues and walks over to the seated woman. He stops by her side and waits for her to look up.

She’s been weeping. How did he know?

She looks up at him and smiles, takes the tissues and rubs her tears away.

The teller still hasn’t spoken, but he’s placed one of his hands over the woman’s and patted it softly.

I’m leaving the riverside carpark, she’s coming in pushing an occupied pram. She’s shouting at someone.

‘Hey! Where are you going?’

I stop and turn around. Nobody there. Then she’s past me.

She bounces her pram over the carpark curb and strides in amongst the parked cars. Chasing her man.

From: Ballina
← generations, the last of the trilogy
lena →
No comments yet